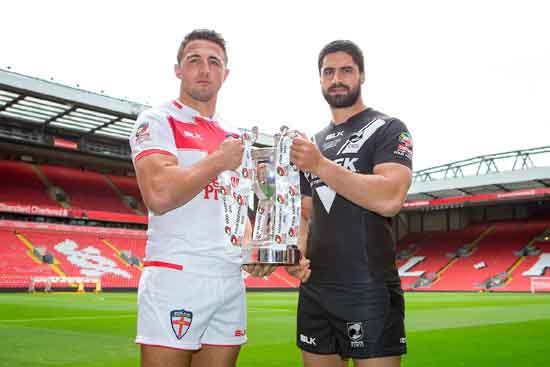 England coach Wayne Bennett has selected his 19-man squad for their first game of the Ladbrokes Four Nations against New Zealand at a sold out John Smith’s Stadium on Saturday, October 29 (2.30pm).

Bennett has made five changes to the squad that was named for the game against France last Saturday in Avignon. Sam Burgess returns as England captain and makes his first appearance since the Rugby League World Cup semi-final against New Zealand at Wembley Stadium in 2013.

Joining Burgess in the squad is also Dan Sarginson, who last played for England in the 2014 Four Nations against the Kiwis, Chris Hill, John Bateman and George Williams.

England’s last victory over New Zealand was last year in the 2015 International Series win which ended in a 20-14 third Test victory at DW Stadium – Elliott Whitehead claimed two tries and Gareth Widdop scored eight points from the boot that day.

On the squad, Bennett said: “I was pleased with the way the players conducted themselves last week in France and the hard work they put in.

“There’s things we’ve looked at in the game and worked on this week. The boys know the pressure and the intensity will rise as we get closer to Saturday – it’s a challenge we’re all looking forward to.

“We’ve got a strong squad here who are ready to go and desperate to play to show us what they can do which is good to see.

“Sam’s also back from suspension and ready to pull on the England Rugby League shirt. It’s been a few years since he played over here and I’m sure the sell-out crowd at Huddersfield will be keen to see him out there.”

On New Zealand, Bennett added: “They’re a talented Rugby League nation who know how to play the game and use the ball.

“Playing in intense games like these is something they are used to and is something we need to match and work hard if we want to get the result.

“David Kidwell is a good coach and will have his players ready for Saturday. We will be fully focused on preparing ourselves well and doing the best we can.”

The game against New Zealand is sold out and can be viewed on BBC One from 1.15pm (includes highlights of Scotland v Australia) or listened to on BBC 5 Live Sports Extra from 2.00pm.

The 2016 Ladbrokes Four Nations featuring England, Australia, New Zealand and Scotland starts on Friday, October 28 and more than 50 per cent of tickets are priced at £25 or less. Buy tickets at rugby-league.com/tickets or call the Rugby League Ticket Hotline on 0844 856 1113 (calls to this number will cost 7p per minute plus your phone company’s access charge.)