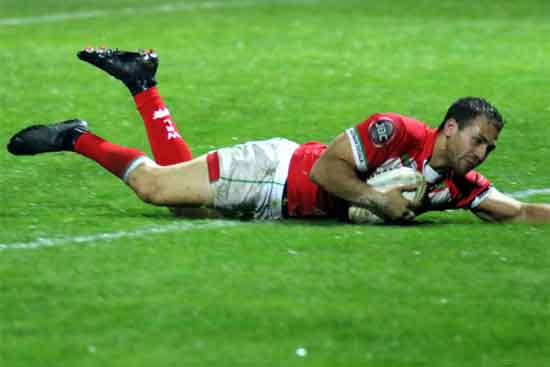 Italy has picked the same 19, but Wales are forced into changes as the nations meet at the Stadio Brianteo in Monza tomorrow (Saturday), to decide the Pool A automatic qualifiers for the 2017 World Cup.

The winners will play in Group C alongside co-hosts Papua New Guinea next year, with the losers headed for the final qualifying play-off in Leigh next Friday (4 November).

The Azzurri are fresh from a comprehensive 62-14 win in Serbia for the first-ever rugby league match in the sports-mad city, with the kick off time moved to 4pm CET to accommodate a festival of rugby league, including a curtain-raiser which will see Italy ‘A’ face Belgium.

Italy head coach Cameron Ciraldo commented: “Wales are deserved favourites and have a very strong squad and a number of very talented players who are in good form.

“We are very excited to be playing at home in Monza and hopefully have a good crowd to support us. We have come together very well and I’m confident we can challenge, I believe a lot in this group.”

Terry Campese will again lead the Italian charge, the squad having come through a virus that ran through the camp this week.

Wales are forced into three changes after Ollie Olds, who suffered a broken hand in their home win over Serbia, Jake Emmitt who picked up a hamstring injury in training and Ian Newbury, who damaged a leg in their draw with Jamaica last Friday, were all ruled out.

“Italy are very experienced, they have a lot of talented heritage players in their squad,” said Wales coach John Kear.

“They had a good win in Serbia last weekend and looked dangerous so we know that it’s going to be a big challenge. After the disappointing draw with Jamaica which acted as a wake-up call, we’ve had a good week in training and we’ll be looking to go out there and put in a performance.

“Hopefully, that’ll be enough to get us through to next year’s World Cup.”

The nations met in the group stages of the 2013 World Cup, with Italy winning 32-16 at the Millennium Stadium in Cardiff.

The match will be live streamed at: https://www.youtube.com/watch?v=b3d8XnEjJng