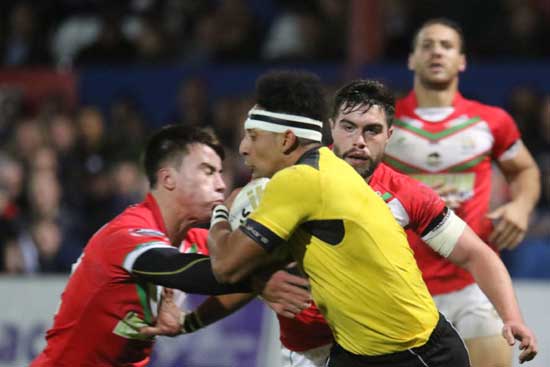 A late, hat-trick try from winger Aaron Jones-Bishop, from a terrific offload by skipper Wayne Reittie, saw Jamaica pull off a sensational draw with Wales in front of almost 1,400 vociferous fans in Wakefield.

The Reggae Warriors, who led 12-8 at the break, produced, arguably, the most important result in their history, having also beaten Ireland last weekend on their first games in Europe.

Team manager Glenn Morrison was full of praise for his men who cranked up the volume in their dressing room post-match in celebration. “We’ve come a long in the few months we’ve been together and in these couple of games,” he said.

“We dug deep, were pretty solid defensively and had each other’s back, especially when we were a man down – the character in the bunch to put that aside and come back for the equalising score said everything about us.”

Morrison was keen to stress the legacy aspect. “To come out with a result like that, I don’t think anybody expected it, we’ve got to take a lot of positives and hopefully get more exposure, especially back in the island where they’ll realise we can play rugby and are not just sprinters, there are some really good athletes that play over there.

“We wanted to establish credibility and be competitive in international games, a lot of Super League players qualify and I’ve already had a few of them wanting to be involved leading up to World Cups.”

The Dewsbury head coach, who has worked closely with JRLA director of rugby Romeo Monteith back in Kingstown also paid tribute to the crowd. “Every time we made half a break they were fantastic and you could see the boys dancing on the pitch and in the dressing room afterwards, that’s what we want to be a part of, I’ve got a buzz out of it.”

Wales used the match as preparation for their World Cup qualifier in Italy next week, victory in which will see them through to the 2017 tournament.

They took the lead through in-form Rhodri Lloyd who crashed over in the corner, Lloyd White missing the conversion.

Lloyd could have had a second but was brought back for a forward pass and Jamaica took advantage on 24 minutes when Jones-Bishop collected a high kick and beat his marker to score in the corner, Jy-Mel Coleman converting to give them a 6-4 lead.

Wales led again on the half-hour after winning a repeat set, Andrew Gay was denied by a crunching tackle but from the next play, Courtney Davies forced his way over, White again missing with the extras.

Jones-Bishop grabbed his second just before the break, a fine solo effort fielding a long pass and grubbering around the defence to touchdown, Coleman again on target.

Corey Hanson’s sinbinning on 65 minutes saw Wales take advantage of the extra man straight away, White nipping over and Davies converting to edge them two points ahead.

Jamaica looked to level three minutes later but Coleman’s 40 metre penalty was short, Davies then extending Wales’ lead to 16-12 with a successful attempt from 20 metres out.

But Jones-Bishop sprinted into the corner for his third in the last minute and Coleman’s conversion attempt to win swung agonisingly wide.

Wales coach John Kear commented: “I was really disappointed with our attitude, I don’t think we respected the opposition enough and I find that unforgivable.

“We tried to play fancy football rather than working hard to win it and we got what we deserved, we were sloppy in attitude, preparation and execution. – only some pretty good defence has kept us in the game.”

“Individuals don’t win you games, it’s the team and we were off the mark, it’s a salutary lesson and gives us a great deal to work on, we’ll have to improve against Italy.”