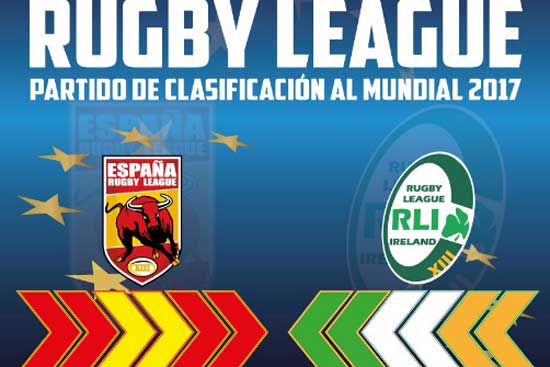 Ireland welcome their professional players back into the ranks as they begin their Rugby League World Cup qualification campaign in Spain this weekend.

The Wolfhounds take on the Spanish this Saturday in Valencia and victory is vital. Russia have taken an early lead in Group B after beating Spain 40-6 in Moscow last weekend.

As the seeded team in the group Ireland are expected to win this game but will be aware of the potential banana skin that a skilful Spanish side hurting from their loss could be. Spain draws its players mostly from the Basque region who play their rugby league between Spain and France.

Only the winner of the three-team group qualifies automatically for the World Cup, with the second placed team facing a play-off against either Wales, Italy or Serbia.

An Ireland team of only domestic players were outmuscled 68-16 by Jamaica in Bray last weekend after good recent wins over Malta and Italy. However, Ireland will be bolstered by big names from the Super League in England and Australia’s NRL when they face Spain.

They include the likes of captain Liam Finn of Wakefield, Warrington Wolves brothers George and Toby King, and James Hasson from the Parramatta Eels.

Richard Egan, Rugby League Ireland Director, said: “The Spaniards are relatively new to the rugby league fold but have made huge steps in a short time and have been very strong in their European Championship games to date.

“With a tough game behind them Spain will be a lot sharper for this match. They have some excellent organisers as well as big aggressive ball carriers.

Ireland require a win against Spain to remain favourites in the hunt for qualification.

“We expect a very tough game in Valencia this weekend. Our players are already focusing their minds on getting the task done.” Richard Egan said. “We have the team and the ability to qualify from our group but need to be respectful and aware of the progress that Spain have made in recent years.

“They will be a huge challenge and although they are new comers to this level we know that they will be well organised and have huge passion to qualify for the World Cup.”

Ireland’s 22-man squad to face Spain contains eight domestic players who either play their club rugby league in Ireland or have come through the club system in Ireland.

Following their loss to Russia, Spanish head coach Darren Fisher said: “Our focus is now about bouncing back against Ireland and putting some things right, the boys have got to believe in themselves and pick themselves up and that’s what we’ll try and do.”