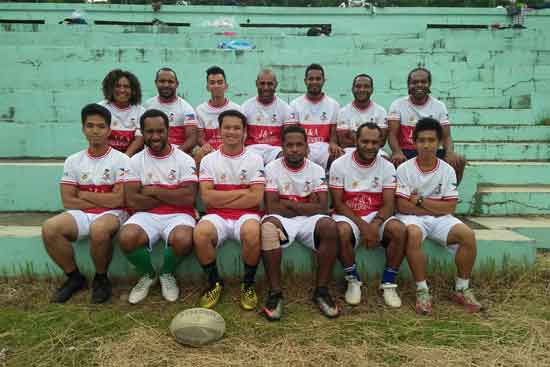 This Saturday and Sunday, the 15th and 16th of October 2016 at Bicol University, Albay Sports Complex, under the banner of the Philippine Tamaraw Rugby League Inc (PTRL) which is the organizational name of the game of Rugby League as registered, in the Philippines. “The Greatest Game of All” will commence its maiden tournament as the Erick Paul Estepa Elefante Cup!

This endeavor has been over a year and a half in the making with organizing being demanding at times due to work being done to organize the tournament in two countries – Australia and the Philippines.

The PNRL are eternally grateful for the hard work of PNRL Volunteer Marc Leabres who coordinated the tournament organization from Australia and the support given him by Vice President Paul Sheedy, which was invaluable to make this tournament happen.

We would not be seeing this tournament happen today without the passion, commitment and dedication of the team managers on the ground, without whom there would be no local Rugby League teams and no tournament.

The Philippines is fortunate that thousands of Papua New Guinea (PNG) students are studying in the country. With PNG the only nation on Earth where “The Greatest Game of All” is the national sport. Their experience in playing, officiating and managing the game has been invaluable to the PNRL.

The heavy commitment of PNG Internationals in this maiden tournament is clear when we note that 3 of the 4 Team managers are PNG Nationals.

Gorden Asa who hails from the Kandep Enga Province in PNG had the most demanding task of all 4 team managers, because he had to create a team from scratch, with the support and sponsorship of Marc Leabres. And through Gorden’s hard work the Central Luzon Crusaders were created in Cavite.

Isaac Kepu from the Southern Highland Province, Ialibu, psp village (KFC. Compound) in PNG. A 4th year Bachelor of Science in Industrial Engineering student, had the next most difficult task. Explaining to University of Batangas administrators what Rugby League was, let alone be part of creating a new sport in the Philippines that no one had heard of. In the last month Isaac was also doing all this work in the middle of his exams! Through his hard work and support from other PNG students and local Filipinos they have formed the University of Batangas Toro side.

The PNRL were fortunate that Timothy Buipe who comes from the Western Highlands province of PNG contacted the PNRL 2years ago because he became the PNRL Rugby League Development Officer. He has been the foundation upon which we have formed relationships with so many of the PNG students playing in the tournament and the able leader of the Manila Storm side who have already played against the Hong Kong Residents and Albay Vulcans teams.

Makati born, PNRL local Board member Ric Raymond Bellen has been with the PNRL since it was created in 2011, first as a player for the Bataan Merchant Marine academy Maritime Academy of Asia and the Pacific (MAAP) Warriors Rugby Union & League teams. The organizer of local Merchant Marine teams for the 2013 inaugural Clark International 9s and the first PNRL representative to organize a tournament with PNG students in Clark City in 2014. Moving from Manila to Albay that same year he established the Albay Vulcans Rugby team that play both “The Greatest Game of All” and “The Game they Play in Heaven”!

So making Rugby League history will be the following teams and players:

So come along this Saturday the 15th and Sunday the16th of October to the Bicol University, Albay Sports Complex and watch The Greatest Game of All commence in the Philippines and be part of the country’s new sporting history!