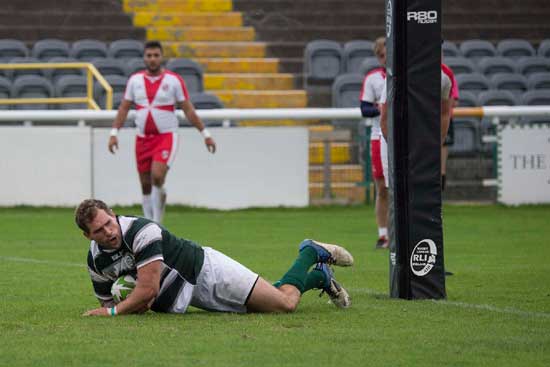 Following their 58-10 warm up win over Malta in Bray yesterday, Rugby League Ireland has finalised their 22-man squad for their 2017 Rugby League World Cup European Pool B Qualifiers against Russia and Spain in October.

James Kelly who scored a hat-trick is included, one of two players from Dublin City Exiles, as is two-try Galway Tribesman Alan McMahon, part of seven selected from the domestic and student set up.

Warrington brothers George and Toby King are in contention after their Super League Grand Final heartbreak along with St Helens departing full-back Shannon McDonnell who is hoping to make his debut.
Most capped and highest points scorer for Mark Aston’s men, Wakefield’s Liam Finn, again captains the party.

“I’m looking forward to playing and captaining Ireland in the World Cup qualifiers once more,” he said. “Nothing will surpass the pride I have to play for Ireland alongside some of my closest friends. It’s a tough ask in terms of logistics but luckily, once we get together as a team all that matters is enjoyment of rugby and our togetherness.

“To qualify for next year’s World Cup is our goal and to get there essential, in my opinion, for the continued development of rugby league in Ireland. Hopefully we get the chance of a lifetime to play in Australia and I’m sure the qualifying games will live to expectation.

Ireland have one further warm up match, against Jamaica in Bray next weekend.