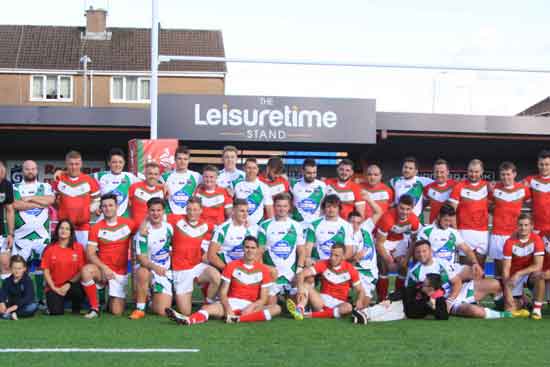 South Wales Ironmen’s new home of The Wern in Merthyr Tydfil played host to Rugby League for the first time on Sunday with the Wales Dragonhearts side beating Devon County 54-6.

The Dragonhearts, the representative side of Wales Rugby League’s community ranks, were using the match to prepare for their trip to face the German national side later this month, and were in control for most of this encounter.

And whilst the semi-professional Ironmen, who funded the ground for this fixture, weren’t playing on this occasion, one of their 2016 development side’s players in Tom Plance, the Scotland Students international who originates from Exeter, was turning out for Devon.

Wales took the lead just two minutes into the game when Matt Davies was on the end of a good passing move to score in the corner. Cardiff’s Bradley Williams missed the conversion attempt.

Devon took advantage of an error in the Welsh defence to level things ten minutes later after Jack Carlisle was allowed to just place his hand on a loose ball to score a try. Ben Spear converted to give them a 6-4 lead.

Wales regained the lead on 25 minutes when Curtis Ford set up his West Wales Raiders’ team mate Ben Swift for a well-worked score. Williams converted this time to make it 10-6.

From kick-off they got a third, Daf Phillips on the end of some slick passing, this time the try going unconverted.

And they went into half-time with a very comfortable 20-6 lead when Valley Cougars’ Rhys Davies stormed his way over and Williams converted.

Dragonhearts came storming out of the sheds and scored five tries in the first 20 minutes of the half.

It started from the first set as Chester Gladiators’ Johnny Rae made a clean break to the line and Aaron Lewis converted.

Matt Davies charged through for his second not long after that with Lewis again adding the extras.

Ross Price added the next, a scramble in the corner, with Lewis converting with ease from the touchline.

After some good hands from Scott Giles, Curtis Ford jinked his way over for the eighth try of the game to put the score up to 42-6, Lewis failing to improve for the first time.

Craig Lewis was equally as skilful to score the next with Aaron Lewis adding the goal.

Price almost had a second try but his effort was ruled out for a forward pass by referee Jon Ellis, who had an excellent game after stepping in to officiate at the last minute.

Wales were desperately trying to click the score over to 50 and it took a kick return to bring that mark up, Bridgend Blue Bulls’ Kieron Hooper running 75 metres for an outstanding individual try. Lewis converted again to make it 54-6 to conclude a satisfactory warm-up game for the Welsh.