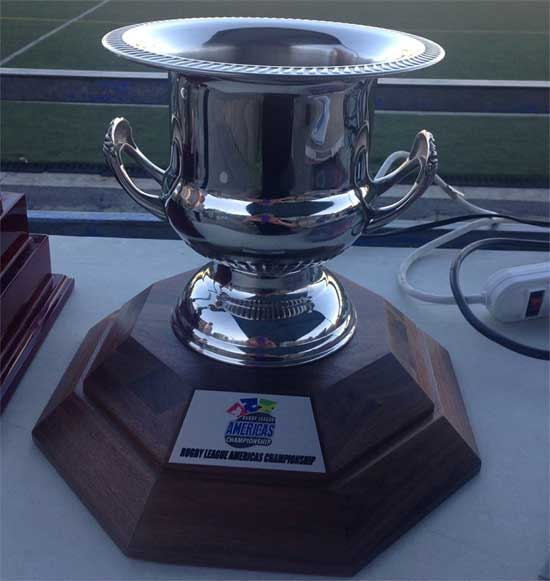 The USA has won the inaugural Rugby League Americas Championship with a gritty 14-8 victory over Canada Saturday night in Toronto.

In a game that also doubled as the opening match of the annual Colonial Cup series between the North American rivals, the Canadian Wolverines dominated possession in the first half, but couldn’t hold off a fast-finishing Hawks side that ran over the top of them in the final quarter.

Former USA Tomahawks national team player Akarika Dawn (Ontario), now a Canadian resident, came back to haunt his ex-teammates with an explosive offensive display that saw him notch the first try of the match early on in the first half, much to the delight of the home crowd at Lamport Stadium.

The conversion attempt was wayward to leave the Wolverines with an early 4-0 lead.

The first forty minutes was punctuated by stout defense by both teams, and as a consequence, there was no more scoring in the half.

The teams came out for the second stanza and again promising attacking raids were snuffed out by stiff defense on both sides of the ball.

They got through the third quarter of the match with no addition to the scoreboard, but in the 64th minute, Canada’s Kevin Gurniak (BC Bulldogs) crossed the line after some enterprising lead up play to make it an 8-0 ballgame in favor of the home team.

Again, however, the attempted conversion was wide of the mark and the Hawks still had a sniff.

From that point of the match onwards, the visitors looked to get in sync and began to take control of proceedings.

Just four minutes later, the Americans finally got on the scoreboard when Roman Lowery (Philadelphia Fight) went over the line to cut the lead in half.

Neither goalkicker had their kicking boots on though as the US conversion attempt by Taioalo ‘Junior’ Vaivai (Illawarra Wests Devils) was wide, leaving the scoreline at 8-4 to Canada.

Then, in the 75th minute, Gabe Farley (Lindenwood University) scored for the Hawks, but as had been the case all night, Vaivai’s conversion attempt missed again and the scores remained deadlocked at 8-8.

However, in a finale that couldn’t have been scripted any better by Hollywood, the USA pulled ahead 12-8 with a scintillating 50-meter try by Test debutant Jon St John (Tampa Mayhem) with just 90 seconds left on the clock.

This time Vaivai was good with the extras to put the Hawks up by a converted try at 14-8.

With virtually no time left for the restart, the final whistle blew to end the match in which the USA Hawks notched a hard-fought victory over their archrivals to clinch the 2016 Rugby League Americas Championship.

The USA ended this inaugural series with wins against Jamaica and Canada, the Canadians had a win and a loss, while the Reggae Warriors came up empty.

The USA and Canada are set to meet again in Game 2 of the Colonial Cup on October 1 in Wilmington, Delaware.

The Wolverines are the current holders having beaten the Hawks 2-0 in the 2015 series.