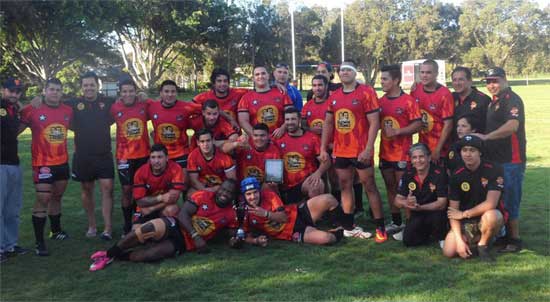 A COLOMBIAN who arrived in Australia with no rugby league experience and bulked up 20kg in two years at the gym will captain a Latin American Development team against Africa United on NRL Grand Final weekend.

In a match that will highlight the GYG Latin Heat’s development pathway, Juan David Espinal Cano will skipper a Latino side which also includes four graduates of the Heat’s youth program.

Both teams for the Saturday, October 1 game at Liverpool All Saints (Hillier Oval, Memorial Ave, Liverpool) will have a heavy involvement of players from refugee families.

While Espinal Cano is not a refugee himself, he has found Australia to be a land of opportunity.
From working odd hospitality jobs, having no car and limited English skills, he has grafted tirelessly to now be a biomedical technician for a Brisbane hospital, is almost fluent with his language and is set to become a permanent resident.

In a sign of his dedication, he still works two jobs, hits the gym early every morning and can be found training for rugby league several nights a week.

After arriving from Medellin at 82kg, he now weighs 102kg and is one of the strongest players in the Latin Heat organisation.

Aside from playing with the Heat, Juan David also suits up for club rugby league in Brisbane for the Wests Mitchelton Panthers, where he has shown much improvement.

“When we have tackling practice, nobody likes to get paired up with Juan David,” Latin Heat co-founder Robert Burgin said.

“I can remember when he first showed up around Christmas 2013, his tee-shirt was hanging off him and we probably only chose him as a second-rower because we were short of numbers in that spot.

“But commitment and a willingness to work hard are definitely his strong points.

“In the early days when he used to get around on a moped, he’d travel 40minutes to training and back in the pouring rain, sometimes having to drop off or pick up his girlfriend at work along the way.

“We have a fitness test we do on an indoor rower…the first time Juan David did it, his time was unremarkable. The second time he came back and smashed everybody’s time by 10 seconds.”

Coach Fredy Arteaga-Figueroa, once a child refugee who fled El Salvador’s civil war after hiding in the mountains as a child and watching family members murdered, said Espinal Cano had won the admiration of teammates.

He is one of four Colombians in the Latin Heat Development side, which plays a day after Aaron Raper’s Latin American Elite Squad faces North America in the Battle of the Americas at St Mary’s Stadium.