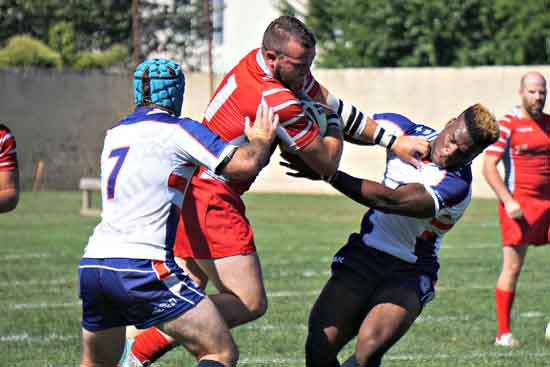 It will be on again this Saturday, September 24, when North American bragging rights go on the line in the Rugby League Americas Championship Series finale.

The Canada Wolverines will host archrivals the USA Hawks in Toronto to decide the winner of the inaugural championship.

It shapes up as an even money bet with both teams having dispatched the Jamaica Reggae Warriors, the third team in the championship, in no uncertain terms.

Canada beat the Jamaicans 38-2 in July, before the United States pasted the Reggae Warriors 54-4 in Philadelphia later that same month.

The Canadians didn’t rack up as many points in their win, but conceded just a solitary penalty shot, while the Americans put more points on the board, but leaked a try. That means the Hawks have a +14 points differential advantage over the Wolverines going into the game, although that is secondary as it really will be all about winning.

“Canada have always proven very difficult and a very strong outfit on their home turf,” said USARL Chairman Peter Illfield. “It will be a big ask to beat them in Toronto, but I think we can be quietly confident.”

Funnily enough, the Canadians are also confident of success, and after all, they will have home field advantage at Lamport Stadium.

“I’m always confident in this team,” said Canada Coach Jamie Lester. “I have been involved since day one and we have come a long way over the past six years. We continue to make improvements from year to year, so it should be a great game.”

Since 2014, when the USARL took control of Rugby League in America, the national team the Hawks have gone 1-3 against the Wolverines. The Canadian victories were back-to-back-to-back, before the US snapped their losing streak when they beat their northern neighbors last December in Florida to clinch the RLWC2017 Americas berth.

So who is going to be under the most pressure to win?

“I think all the pressure has to be on USA,” added Lester. “They won the World Cup Qualifiers last year and are heading to the World Cup next year, so they will want to be taking some good form into that.

“For us, we have a longer timeline that we are building towards. Of course, we believe we are good enough to win, but there isn’t a great deal of pressure on Canada.”

The Americans have a slightly different take on things.

“My expectation is to see a close entertaining encounter that will hopefully put on show more USA players with the potential to press for future international matches and possible RLWC2017 selection.”

This contest also doubles as Game 1 of the annual Colonial Cup series between the two countries. The Canadians are the current holders of that trophy by virtue of their 2-0 series sweep in 2015. That series was played in the fall ahead of the RLWC Qualifiers which took place last winter in Florida.

A lot has changed since then for both teams.

“Our team is completely different to the one that played in the RLWCQ, so our tactics will be different,” continued Coach Lester. “There is certainly a Canadian style of play that we’ll continue to embrace, but our tactics will differ.”

Again, however, the USA camp doesn’t see things quite the same way.

“I don’t think their game plan will change,” said Chairman Illfield. “The RLWCQ’s was a close and tough encounter, which could have gone either way. They’ll come at us with something very similar.”

There is no doubt that since Canada re-emerged on the Rugby League scene back in 2010, the Wolverines have been steadily improving, evidenced by their 3-1 run against the Hawks in 2014/15.

In that same window the Wolverines are 2-0-1 against Jamaica, so one could argue that at 5-1-1 overall against their two rivals they are the dominant team of the Americas, certainly in recent times.

Perhaps it is those statistics that gives the Canadian coach so much confidence because he thinks they can beat the Americans in both of their Test matches this fall.

“As well as our team being significantly different, I’d imagine that the USA team will be a lot different to the team that we played in Florida,” added Lester.

“For me it’s not about reversing a past result, it’s about looking forward and seeing what this new crop of players can do against the 10th ranked team in the world.”

Game 2 of the Colonial Cup series will be played in Wilmington, Delaware, on October 1.