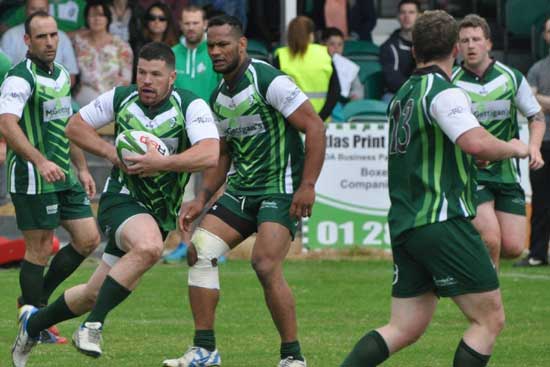 Leading energy consultancy company GET Solutions will have the Ireland rugby league team’s back for a series of high-profile international — matches after winning a competition to become one of the team’s main shirt sponsors.

GET Solutions, which is based in Celbridge, Co Kildare, will have their company logo on the back of the Ireland jersey for four international matches — including two crucial World Cup qualifiers. They join the team’s main sponsor, hotel and pub group McGettigan’s.

Their prize includes shirt sponsorship for matches against Malta (October 8th) and Jamaica (October 16th) at the Carlisle Grounds in Bray, and also the World Cup qualifiers against Spain (October 22nd) in Valencia, and Russia (October 29th) in Bray.

GET Solutions will also be guests of Rugby League Ireland at the three home matches and will be presented with a match jersey with their name on it.

GET Solutions is the leading energy consultancy in Ireland. It helps businesses of all sizes save money on their utility bills by creating and implementing energy solutions which combine the most competitive gas and electricity rates on the market and the latest energy management technologies. In recent years the company has expanded into Europe and Australia.

Managing Director of GET Solutions, Charlie Grendon, said: “We at Get Solutions are delighted and honoured to be sponsoring the Ireland Rugby League team. We are a fully Irish company operating across the 32 counties working with any size company to reduce their energy consumption and carbon footprint. We help companies use energy smarter and get better value for their investment.

“We’re thrilled to fly the flag for Irish Rugby League and join ranks with one of the most exciting sports in Ireland today. Get Solutions and the Ireland Rugby League team are a great combination – energetic, smart and with a keen desire to win.

Rugby League Ireland Director Richard Egan said: “Congratulations to Get Solutions on winning our sponsor competition — we’re really looking forward to seeing their logo on the jersey. They are join a winning team with the Ireland team and our main sponsor McGettigan’s.

“Rugby League Ireland would also like to thank all the other companies which entered the competition. We believe that when sport and business work together they can have a very positive effect on the society by helping to grow participation and involvement in positive and inclusive activities such as rugby league.

“Rugby league is a fast, skilful and exciting sport, and the international matches next month are a great opportunity for people to come and experience it and to support a team which has players from throughout Ireland, North and South.”

Ireland started the international rugby league season earlier this month with an encouraging 26-60 victory over Italy in Brescia. The matches against Malta and Jamaica are expected to present tougher challenges before the crucial qualifiers which will determine whether Ireland make it to the Rugby League World Cup in Australia, New Zealand and Papua New Guinea next year.