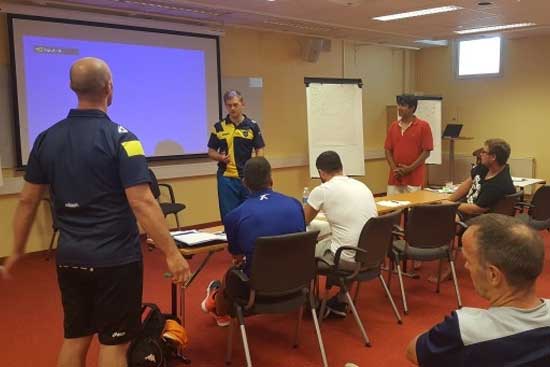 The Swedish Rugby League Forening has hosted a level 1 coaching activity in Lund, southern Sweden, attended by Greek, Czech and RLEF personnel, the latest activity in the EU-backed training and education portal.

Swedish rugby league educator Ashley Brown said: “It is very pleasing to see Swedish rugby league growing and moving in the right direction and adding more competent coaches.” His views were echoed by fellow SRLF educator Paul Briggs, who added: “I felt much more comfortable and confident leading this course after working with Martin Crick and David Lahr over the last two years.”

Lahr, the lead coach educator in the Czech Republic, delivered the majority of the educator training under the supervision of RLEF coaching manger Martin Crick, who noted: “We had a successful seminar. Three new Swedish level 1 coaches were qualified and it was enhanced by the attendance of two Greek trainees, who also qualified and have returned enthused to prepare for their own courses in the future. Co-operation across the member nations continues to strengthen and spread the game.”

The two Greek delegates, Michalis Chatziioannou and Vasileios Lampadochytos, were selected by Crick following an open invitation to apply for new coach educator positions. Lampadochytos said: “It was a great experience. We learned a lot and I can’t wait to join the next course.”

That will be held in Leeds and will launch the RLEF’s new level 2 and a stand-alone website that will act as a repository for course materials, a hub for practitioners to lodge coursework, share their experiences and will become an increasingly populated resource for coaches and match officials in the field at every level.