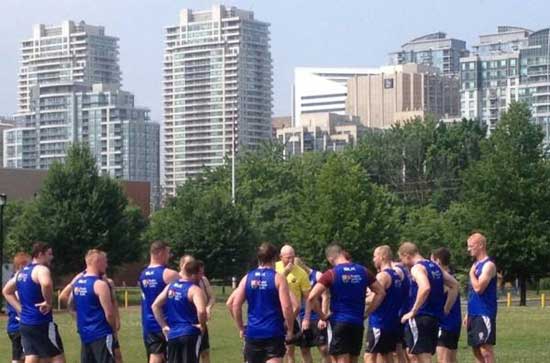 (Photo: Lionhearts touring party training in downtown Toronto on their previous tour in 2014)

The squad for this year’s North West Lionhearts tour to Canada next month is almost ready to depart.

21 players from 16 sides within the North West Men’s League will fly out on August 15th and will play against Ontario State at Burlington Rugby club on Wednesday 17th, before facing the Canadian Wolverines national side at Lamport Stadium on Saturday 20th.

These are exciting times for rugby league in Canada with the Lamport Stadium based Toronto Wolfpack joining the Kingstone Press League 1 next season. With over 4,000 expressions of interest for season tickets so far, the hosts are sure to provide a tremendous atmosphere for the visiting Lionhearts side.

The Canadian Wolverines are currently ranked as the 14th best side in the world and just this weekend beat Jamaica 38-2 in the first game of the 2016 America’s Championship. Their invitation to compete with Fiji, Samoa and Tonga in the Western Union Ohana Cup shows the level of talent they are working with and the ambition they’re bringing to the table!

The North West Lionhearts squad will be doing their bit to further help with the development of rugby league in Canada by delivering a session with the Ontario State Under 17s side in downtown Toronto. Based at the Earl Haig Secondary School in North Yorke, the team will be embarking on trips to the CN Tower and Niagara Falls during their seven night stay before arriving back in England on August 22nd.

The travelling party is as follows: