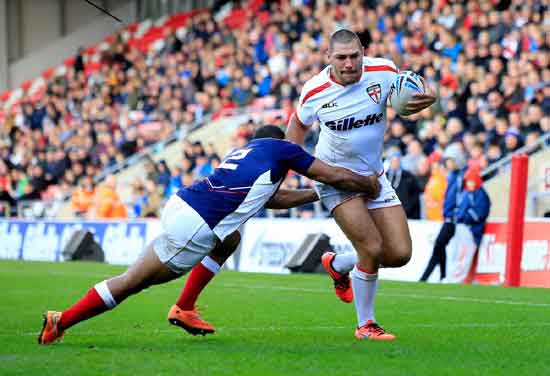 Wayne Bennett’s first game in charge of England Rugby League will be against France in Avignon at the Parc des Sports on Saturday October 22 (6.30pm CET).

This will be England’s only game ahead of this year’s Four Nations where they will meet New Zealand a week later at The John Smith’s Stadium.

Announced as head coach in February, Bennett will take the squad over to Avignon for the first time since 2011 when England defeated France 32-18 and newly appointed Team Manager Jamie Peacock was captain that day.

Home to football side AC Arles-Avignon, the 17,518-seater Parc des Sports has hosted Rugby League games since 1982 and welcomed Australia, Italy, Papua New Guinea, Ireland and more recently New Zealand in the 2013 World Cup and Scotland in the 2015 European Cup.

England and France last played each other in 2015 before the Wall of White went on to defeat the Kiwis, who are ranked No.1 in the world, lifting the Baskerville Shield after a 2-1 series win.

Bennett believes the French will be a different side on home soil: “I can imagine that they were disappointed with how things went when we met them last year. When you play a side at their stadium and in front of their fans, then things can change.

“There’s a lot of pride on the line and an added pressure of doing your best for your country.

“This is my first opportunity to see the squad in action and I feel an away game is good preparation to see how everyone comes together in a new environment.

“The Four Nations is getting closer and I’m happy with how England’s plans are going so far.”

More than 50 per cent of tickets for the Four Nations are priced at £25 or less. Go to rugby-league.com/tickets/fournations or call the Rugby League Ticket Hotline on 0844 856 1113 (calls to this number will cost 7p per minute plus your phone company’s access charge.)