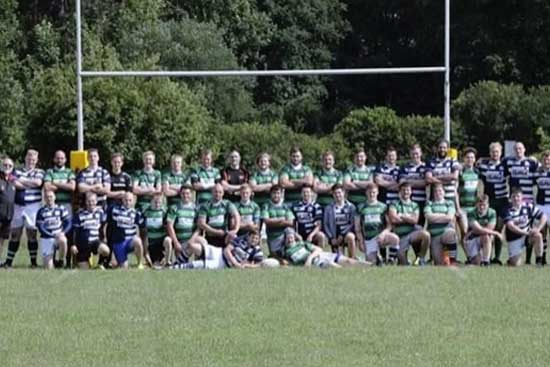 Paderborn has played host to the second rugby league match day in Germany with, again, over 40 players making the journey from all over the country.

Tremendous commitment was shown especially by the team from Karlshöfen, and players from Bremen and Berlin who undertook five hour journeys to be able to play.

There was a tremendous spectrum of experience in attendance, ranging from six of last year’s national team to players who have never played league before.

It was, therefore, unanimously agreed to hold a familiarization training session under the guidance of co-national coaches Simon Cooper and Bob Doughton before play began.

That was followed by two games of touch to make sure the basics had been taken on board before moving on to full contact.

“The enthusiasm of the new guys was very impressive and they were quick to take on the new information,” said Cooper.

Having laid the foundation, the players were split into two teams – “Land” (based on the State of North-Rhine Westphalia) and “Bund” (the rest of the country) and a game of four 20 minute quarters played with rolling substitutions.

As it progressed, the understandable errors became fewer and there were some truly exciting phases of play – both in attack and defence.

“It was clear that the new guys were beginning to understand the dynamics of league and coming more into the game,” Cooper added.

That was most evident with Tom Atkinson, who made several breaks of 30 metres for Land in the last half of the match.

Also impressive was the progress of 17-year-old Seyar Rezai, who made some really strong runs for Bund including scoring a try.

Bund ran out winners 38-28, mainly by exploiting lapses of concentration and communication in the Land defence.

Star of the match, however, was Welsh-born Gwyn Barry, who scored a hat-trick of tries for Land with some athletic and determined running.

“Today was very successful,” noted Bob Doughton. “We’ve introduced over a dozen new players to the sport as well as having a chance to try out some national team players in different positions.

“We have also uncovered some potential for future development. But, most importantly, everybody has had a great day.”

The next events are in Gnarrenburg on 16 July, followed by Dortmund on 23 July.