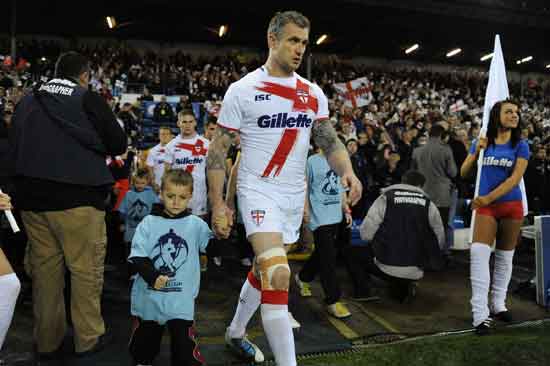 Peacock, who has been capped 47 times (Great Britain 26, England 21), will join Denis Betts and Paul Wellens in the England backroom staff and will bring a wealth of knowledge and experience to Bennett’s England camp. He will be responsible for team planning and logistics, day to day management of the tournament programme, manage relationships with the RFL, clubs and sponsors and will lead on player support.

Making his debut for England in the 2000 World Cup, he is one of the most decorated players in the British game winning the Super League Grand Final nine times, the Challenge Cup four times, the World Club Challenge four times and was named Man of Steel in 2003.

The former Leeds Rhinos and Bradford Bulls player announced his retirement from the international game in 2012 to further his domestic career which he continued until 2015 with the Rhinos before taking up the role of Head of Rugby with Hull Kingston Rovers – a role which he will continue to do whilst on England duty.

On his appointment, Peacock said: “I feel privileged to have been offered the position of England Team Manager. Representing my country whilst playing was always the proudest moments of my career and being the England Team manager will feel exactly the same.

““I watched every game of last year’s series win over New Zealand and you could see the belief amongst this squad – these are special times for England with Wayne Bennett in charge and Sam Burgess returning. I’m looking forward to being part of a winning England set-up.

“Having spent plenty of time with the national sides, I know my experiences will enable me to contribute fully to the role and to the team. I will bring the same level of passion, commitment and diligence I had as a player to this new role, values I expect every England member will also bring.”

England coach Wayne Bennett said: “Jamie was always a player who did his best for his country and thrived in the international game. Having him in camp with the squad is another positive to add to the belief that England can go on and achieve great things.”

More than 50 per cent of tickets for the Four Nations are priced at £25 or less. Go to rugby-league.com/tickets/fournations or call the Rugby League Ticket Hotline on 0844 856 1113 (calls to this number will cost 7p per minute plus your phone company’s access charge.)