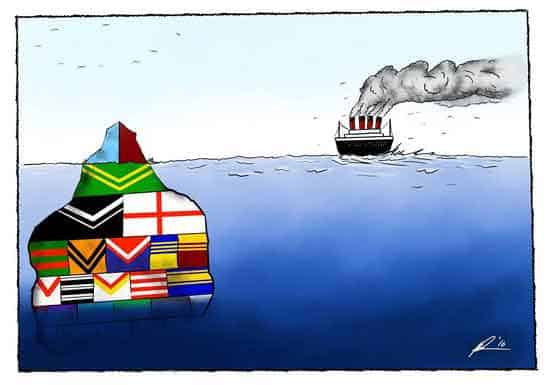 “A game which is owned by Rugby League’’, professes lead Channel 9 commentator Ray Warren moments before kick off in a game which would see NSW again routinely eliminated.

To claim that Rugby League still owns State of Origin seems as likely as New South Wales owning Victoria Bitter, it clearly doesn’t but will shamelessly wear it regardless of the clunky contradiction – and there are plenty.

Take the “Blatchy Blues” for instance, once a dream birthday party for children reaching adolescence, now supported by Crown Casino.

Sorry Rabs, to clarify, Rugby League and it’s standards are at the whim of State of Origin.

The stockholm syndrome the sport now finds itself in with the interstate series is epitomised by the lazy statement; Origin is the “pinnacle of Rugby League’’.

“It’s the pinnacle of the Game” someone may reaffirm, incase you forgot, adding the dot to the question mark of which was never asked. Maybe it’s true for some players? When Jonathan Thurston was interviewed after his debut, he firmly stated that all he “ever wanted to do… [was] to play Origin”.

Who am I to question his opinion? I am merely one of the 4.7 million viewers who tuned in for both games, many of whom may equally share his view.

But what happens when the pinnacle is in fact a hazardous iceberg, ready to sink any future opportunity the sport has sailing its way?

Origin has been treated like a sponge for years; it soaks up vast amounts of our interest and resources so that once in every four years it can be squeezed in TV deals for all it’s worth. But what happens when Game 3 doesn’t sell out? Which it certainly won’t.

The whole premise of millions of impartial viewers tuning in is that they assume it is a big sponge, the perception of it all. A sell out is alluring because it reflects insurmountable interest. Anything less is dangerous for administrators as it literally shows the point in which interest has ended – like a pie graph laid bare for the world to judge.

Game 1 did not sell out, nor would Game 2 until the final hours prior to kick off. Although both games hovered around capacity, camouflaged within was the fact that there were still seats which no one in the State wanted. So what happens if 10, 20 or 30 thousand people don’t turn up for the dead rubber? For the first time since 2004 there may be bays of blue around the stadium, but in the form of plastic seats rather than classy wigs. This is what the impartial supporter will see on TV, and suddenly the squeeze on the sponge loosens.

Is the juice in the future worth the squeeze? At the moment supporters don’t have a say in this decision. Support for Origin is the most top heavy it’s ever been, from State Governments turning the Harbour Bridge Blue to the Daily Telegraph publishing 13 back to back pages dedicated to the battle for the Tweed River. We are locked in a series where the rank and file of suites are expected to turn 4.7 into 5 whether we like it or not, whether it should or not.

It seems a constant insult to have the Origin apologists tell me that players such as Sam Burgess or Semi Raradra wouldn’t waltz into NSW or Queensland, especially when the best of these teams have lost to the Kiwi’s in 3 out of the last 4 fixtures.

It seems ludicrous that we are allow Australia’s premier competition to take 6 weeks off for an interstate challenge.

It’s an outright embarrassment that we would rather hold a game where only one national anthem is played rather than play with some of the other 7 billion people on earth.

And yet the pinnacle continues to bob around under the sun, about to play chicken with the next ship which is silly enough to cross its path, whilst the vast bulk of the sport which remains pushed below the water line seems to tread water to keep the whole thing afloat.

Bored, insulted and tired – that’s what I think of this circus, and truly ready to switch off. You don’t think I am bored? – I wrote the title for this piece on monday.

If NSW losing yet again causes people to look elsewhere for their Rugby League fix, then I could recommend a special club!

If you care for the game’s big picture, and wish to have an active influence in seeing it grow, then why not join us at the Rugby League Development Fund?