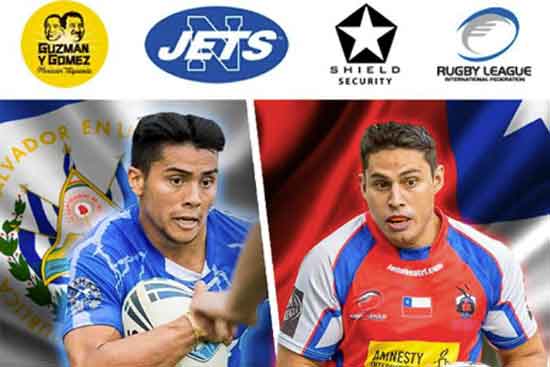 Held at Henson Park, home of one of the oldest clubs in rugby league – the Newtown Jets – the day featured dancers from Rapa Nui (Easter Island), Latino cuisine and a colourful array of flags waved proudly from the sidelines.

The main game saw Chile lift the GYG Shield of Defiance, after a tight opening stanza had scores level 6-all until the 18th minute.

Chilean Consul General to Australia Humberto Molina Reyes was among those who visited the Chilean team in the changing rooms before the game.

El Salvadoran Ambassador Luis Jose Menendez Castro did likewise for their opponents, while early games were attended by Uruguayan consular staff and members of the Australian Ecuadorian Cultural Association.

Chile’s big win was earnt through superior fitness and ball movement, scoring 40 consecutive points in the middle period of the game.

In their first hit-out over 80 minutes at an international level, El Salvador showed heart to stage a late fightback, scoring three out of four tries at one stage and holding Chile scoreless for 21 minutes.

After featuring before the match in an emotive video about his upbringing in El Salvador, veteran centre Paco Godinez scored the final try of the day for El Trueno Azul.

Indeed, the match was notable for the number of players from both sides who arrived in Australia as refugees, or as first descendants of refugees.

Fullback James Horvat – the son of a Chilean mother and Croatian father – was among the best on ground, while Jaden Laing (mother Chilean, father Fijian-Samoan) was his usual powerful self.

But perhaps the difference on the day was the direction of Chilean five-eighth Brad Millar, who constantly straightened the point of attack, threw in a mix of reverse passes and found gaps both inside and outside.

Big prop Eduardo Wegener was narrowly denied a hat-trick with his powerful runs close to the line, held up for what would have been a third try.

Teen forward Mana Castillo also had a nice story to tell, barging over to score after receiving a late exemption from a university exam.

El Salvador’s best were the nippy trio of Miguel Gonzalez, Alvaro Alarcon and Miguel Alarcon, all of whom provided moments of magic during the game.

Both shields were contested over a two-game series that provided a string of tight results.

Indeed, Uruguay’s 12-10 win over Peru in Game One of their series was decided by a Matty Booth try on the final play of the game.

Meanwhile, Ecuador’s 24-18 win over Colombia on two-game aggregate was only achieved after Colombian speedster Alejandro Restrepo was tackled into touch five metres before the tryline.

Both Uruguay and Ecuador unveiled an impressive amount of new players, which augers well for both nations going forward.

Following the game the Chilean players attended a fund-raiser for the Chilean community, where a donated jersey raised $240 and players were asked for photographs and autographs