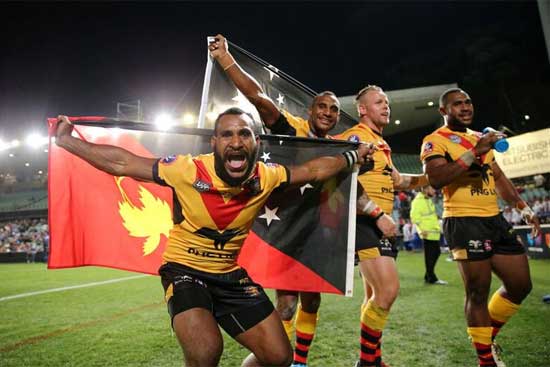 Papua New Guinea, who will host a group in the 2017 Rugby League World Cup, were the big winners after the southern hemisphere international weekend, moving up three places to eleventh in the new world rankings.

The Kumuls beat seventh-ranked Fiji 24-22 and the impact has been highly significant according to PNGRFL chairman, Sandis Tsaka.

“Going into the 2000 World Cup, PNG was ranked in fourth place behind heavyweights Australia, New Zealand and England. However, since then we had dropped to 14th place in 2015.

“The win against Fiji last month was our first in an overseas match in 16 years and followed a home win over Tonga in 2014 and a close loss to the Bati in 2015.

Tsaka continued: “The strengthening and growth of our domestic rugby league programmes and the introduction of the SP Hunters into the Intrust Queensland Cup three years ago has opened up international pathways for more of our elite players.

“The growth and success of such initiatives will make us more competitive in international rugby league.

“We will seek to engage in more international and Test matches as a lead up to the 2017 World Cup to help prepare and build a good quality and competitive Kumul team for the tournament.”

Despite narrow defeat to Samoa, Tonga also moved up a place in the rankings, to 15th.

The three leading nations, New Zealand, Australia and England, will be fighting for top spot in the autumn Four Nations series to be held in England, Scotland also taking part.