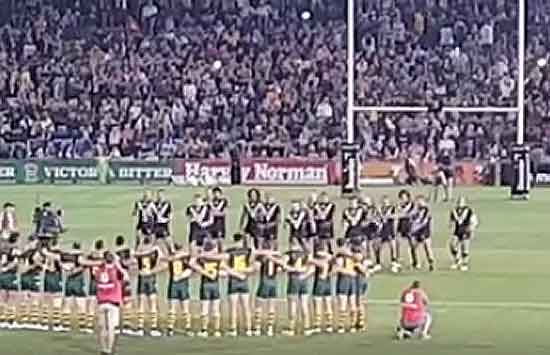 Australia defeated the Kiwis 16 – 0 on Friday night in front of 27,724 fans at Hunter Stadium Newcastle. It was the first win for the Kangaroos against the Kiwis since 2013. If Friday night’s game is anything to go by Australia might have to wait a few more years before they rollover New Zealand again.

The Kangaroos line-up on Friday was World class but as Phil Gould rightly pointed out during the Channel 9 telecast a swag of Kangaroos are now over 30 and it showed on Friday night. But that is the least of Australia’s worries. The Kiwis were missing the likes of Issac Luke, Kieran Foran, Manu Vatuvei, Roger Tuivasa-Sheck, Simon Mannering and a host of other top notch players.

If the Kiwis had a full strength team on Friday night it would have been 4 wins in a row for the Kiwis and Australia would have been left picking up the pieces. So now Australia will head to the 2017 Rugby League World Cup with a false sense of security thinking they have the Kiwis measure.

Mal always shows loyalty to players as he has shown with the Queensland team in the past. So Mal will persist with Dads Army all the way through to the 2017 Rugby League World Cup and hand over the World Cup to New Zealand.

The only thing that might jolt Meninga and the selectors into making changes will be the Four Nations in England during October / November later in the year. If the Kiwis field a full strength team and England play at their potential then Australia could finish the Four Nations in 3rd place. This would have the Australian’s hitting the panic button and maybe just force the selectors to bring in much needed fresh talent.

So should Australia hand over the World Cup to the Kiwis now? Maybe but I am sure England and the rising Pacific nations might have something to say about it, that’s if Australia doesn’t poach all their players in the search for fresh talent in the meantime!