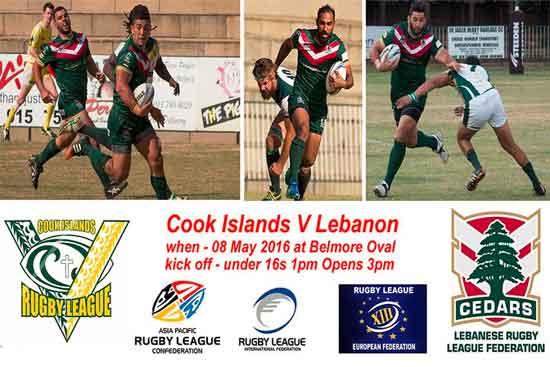 Nine of the 17 that clinched a berth in next year’s World Cup are included in the 17-man Lebanon squad which faces Cook Islands at Belmore this Sunday.

The Cedars will, however, be without long-serving skipper Chris Saab and veteran vice-captain Ray Moujali, who are both injured.

Debutants Dominic Ayoub, Bernard Kairouz, Jason Wehbe and Elie El Zakhem come into the side while, for the Cooks, only Geoff Daniella survives from the team that defeated Lebanon 28-24 in the nation’s last meeting in October 2012.

“Coaching the Lebanon national team is an honour,” said the 43-year-old.

“I’m humbled to take such a prestigious role. I’m confident that the boys will do our country proud on Sunday and that the reaction will filter through to the domestic competition in Lebanon,” continued Houchar, who coaches Guildford in the Ron Massey Cup.

“It’s been 17 long years since Lebanon last qualified for the World Cup and our aim is to compete in every game in the lead up and earn the respect from other nations.”