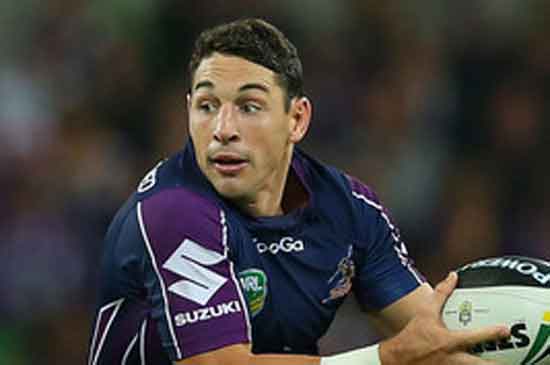 With Billy Slater’s NRL season finished and the ace fullback recovering from shoulder surgery, many are speculating that it isn’t just his season that’s over but also his career.

With the Melbourne Storm currently one point clear at the top of the NRL Telstra Premiership after their win over the NZ Warriors, it remains to be seen whether the Storm can remain at the top of the table without the influence of their star fullback. Having played his whole NRL career at Melbourne, and setting the club record for most ever tries and a separate NRL record for most ever tries by a fullback, his absence from the team will be a big blow. Here at Sports Bet we’re interested in how the crowds will react and what impact it will have on the NRL betting.

Having played 278 games across 14 seasons, Billy The Kid missed the end of last season because of a problem with the operated-on shoulder. Needless to say, many commentators are speculating that this could be the end of Slater’s illustrious career.

In a statement released by the club, Melbourne Storm said:

“Billy Slater has this afternoon undergone surgery on his injured left shoulder […] the arthroscope revealed further issues with his shoulder that needed attention, the result of which will see Slater sidelined for six to eight months.

“The surgeon was very happy with the surgery and is confident Slater will make a full and successful recovery.”

Storm manager Frank Ponissi was pleased to hear the medical team expect him to make a full and successful recovery,” and Storm centre Will Chambers echoed this while backing the NRL veteran up: “Bill is a big part of this club and has been for a long time. It’s very disappointing.”

In the meantime, emerging star fullback Cameron Munster has once again taken over the fullback role, having impressed everyone when he initially took over from Slater last year.

While we’re gutted for Billy The Kid and hope it isn’t the end of his impressive career, at Sportsbet we’ve been left questioning how he’ll bounce back from the injury. Here are a few things he can do while he’s getting some rest and recuperation that will make the estimated six-eight months recovery time fly by:

Post-surgery and pre-rehab, there’s going to be a lot of time to fill, so why not spend the time getting stuck into some quality Netflix n chill time? If Billy The Kid wants to live up to his namesake, there’s plenty of westerns to watch. Failing that, if he wants some tips to politic his way back into the Storm side upon his return why not catch up on the new season of House Of Cards?

With bets available on all NRL fixtures from Sportsbet, one way to keep up to date with all the games is to have a flutter on them. If Slater wants nothing to do with rugby while he’s recovering, there’s plenty of other bets he can make such as AFL, tennis and grand prix. With offers to take advantage of too including Money-Back Specials, Protest Payout, Extra Places, Justice Payouts and Mega Bets, if he’s half as good at betting as he is at rugby we’re sure he’ll be rolling in it.

Rehab is going to be a long struggle for Billy, and getting mobility and muscle mass back to pre-injury strengths is going to be sore and require all his will power. With the backing of his coach, team mates, wife and kids, we expect Billy Slater to weather the storm and come back to the pitch fighting fit and raring for rugger. Good luck Bill!