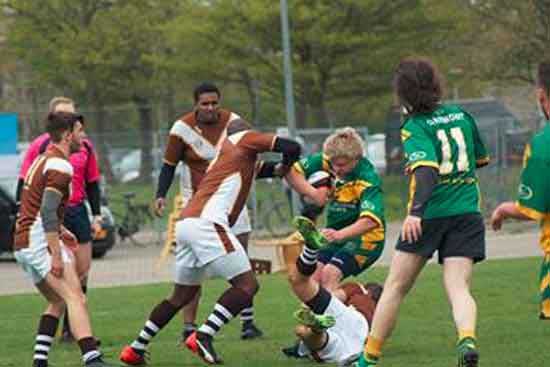 The first Netherlands rugby league championship has kicked off with Rotterdam Pitbulls defeating Amsterdam Cobras 60-14 in the opening match.

The initial three-team competition, Den Haag Knights this weekend host the Pitbulls, will be increased to four next season with the admission of Harderwijk Dolphins.

The Dolphins are set to play a number of friendlies throughout the current season, including against a new side in Maastricht.

NRLB development manager Jason Bruygoms said: “We now have our first-ever Dutch only competition with the goal to expand each year. This season marks a year where we will be playing the most games in a domestic competition, which is great progress.

“The NRLB’s strategic plan was to really focus on domestic growth and it is starting to pay off as we have got a big influx of people participating in the sport, this we hope will eventually help strengthen the national team.”

The formation of the championship is also intended to support the NRLB strategy of obtaining government recognition in 2017.

The Nederlandse Rugby League Bond has been in direct communication with the Nederlands Olympisch Comité and Nederlandse Sport Federatie and must run a four-team competition to comply with local regulations.

At the end of the inaugural three-month competition, the winner of the Grand Final will play against North Brussels Gorillas for the BNRL Championship. Last season the Gorillas competed with the Dutch teams but the Belgium Rugby League Association is also pursuing a strategy of club registration.

The NRLB has also announced a partnership with Nutrition X who will become the official sports nutrition supplier to the international team and the Netherlands Rugby League Championship.

Kane Krlic, Netherlands Rugby League head coach noted: “We are confident that this partnership will help us to take the next step in creating a more professional environment. We are not only hoping that this link up aids our international players to perform at a higher standard but it will also allow all the players throughout the domestic competition to prepare better”