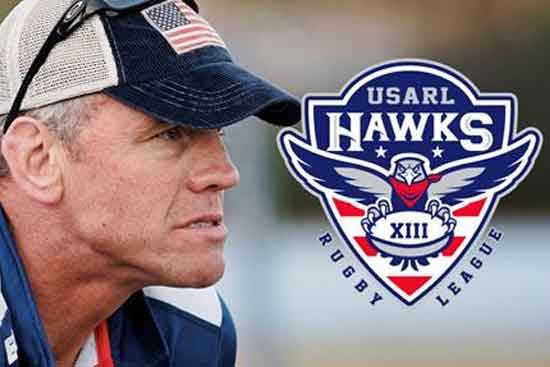 Brian McDermott has confirmed that he will continue as the USA head coach for the 2017 Rugby League World Cup in Australia, New Zealand and PNG.

McDermott, 46, a former professional player with Bradford and recipient of last year’s UK Sports Coach of the Year Award, is considered one of the best in his field and most successful in the history of reigning Super League champions Leeds Rhinos.

“I’m very pleased to have been invited to continue my role with the USARL and to take the Hawks to the 2017 Rugby League World Cup,” McDermott said. “What’s already been achieved is the result of a lot of hard work and commitment with much more preparation required. I’m looking forward to working alongside a dedicated group of people that have demonstrated the desire to succeed and are willing to make the necessary changes in order to adapt.”

During 2015, after the Rhinos had achieved an unprecedented domestic treble for the club, he volunteered his time as head coach of the USA national team, guiding the Hawks to victories over Jamaica and Canada and qualification for their second successive World Cup tournament.

McDermott added: “Rugby League around the world needs brave people and those who are willing to make the necessary sacrifices to establish their mark. That philosophy instilled within the USARL is as much an attraction as it is working with the players again and one which enabled the team to qualify.”

USARL chairman, Peter Illfield said: “Brian’s involvement has had a profound impact on our players wanting to improve their rugby league skills at both home and abroad. We’re thrilled that he values the type of culture and organization that we’re building in the USA. The sport will only get better here from now on.”

Assistant Coach, Sean Rutgerson, has also committed to the Hawks for World Cup.

He played for North Sydney Bears and Canberra Raiders in Australia’s NRL, Salford City Reds in the European Super League and Jacksonville Axemen in the USA domestic competition and is a conditioning coach and personal trainer. He represented South Africa in the 2000 Rugby League World Cup.

Details of the USARL 2016 international schedule will be released shortly.