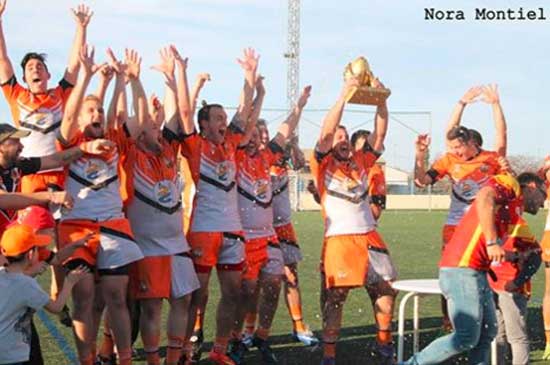 Torrent Tigres came from behind to claim the third Spanish rugby league championship, beating Custodians Madrid 10-8 in a terrific encounter at the Alter Stadium, Torrent in front of an enthusiastic crowd of over 350.

The hosts took the lead in the fifth minute, hooker Carlos Jané sending full-back Enrique Toledo over at the side of the posts, Alberto Manjón goaling.

Custodians replied in the 17th minute, Spanish international Toni Puerta with an unconverted try that was the only other score in a tight first-half.

The visiting forwards began to get on top at the start of the second period, Alberto Moreno putting his side ahead for the first time but wide with the conversion attempt.

After an hour, and on the back of some superb defence on both sides, Tigres came up the winning try, Spanish national captain and player/coach Aitor Dàvila palming the ball on to centre David Ubeda for the crucial score.

Dàvila commented: “The guys are young and were nervous, experience is key in these games, we made some mistakes on attack but held on to win. I am so proud of the effort that they put in that I have agreed to continue with them as coach for another year. It means everything to be the best team in the country.”

Opposite number Juanlu Mudarra, Custodians coach said: “The home fans really got behind their side who worked well tactically and were eager to get amongst us. We prepared well for two weeks and it went down to small details. There were only flashes of quality from our decisive players but our team held together. The Tigers played all their cards perfectly any time we controlled the game and were fair winners in a tight contest.”

The match can be viewed here – https://youtu.be/vVHKOVBtR0s