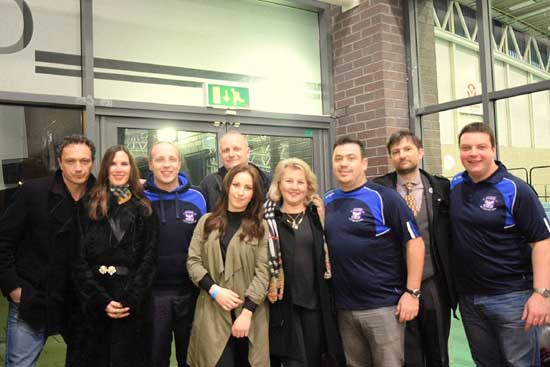 Manchester Rangers Rugby League club and the Polska XIII (Polish Rugby League) have announced a partnership that will see them both work together to grow the game within Poland and Manchester’s Polish community.

Lodz is the birthplace of Polish Rugby League. Polska XIII President Lukasz Lucka established the first team in Poland the Lodz Magpies after coming across the sport on the internet.

Lodz pronounced ‘Wu-tsh’ is Poland’s third largest city and is often referred to as Poland’s Manchester. Its translate literally as Boat and is an industrial city famed for innovation.

Manchester Rangers player and Community Coach Anthony Petrykowski travelled to Poland in 2015 to coach their Local & National Rugby League team. Anthony has always been interested in his Polish family background, whose grandfather was born In Steklin, Poland and was in the Polish army during the Second World War.

The Polskie Echo, which is UK based Polish newspaper were invited to Manchester Rangers the season launch event at the Manchester Regional Arena, Sports City. Rangers are wanting to build a relationship with Manchester’s Polish community and invite people to become part of the club. Offering a chance for people to become involved either as spectators or as coaches\players in both the senior teams and the junior side Bellevue Bees. The club are looking to have a Polish speaking Ambassador to make Polish spectators feel welcomed into the club. In return the Polska XIII will help with the translation of club news into Polish and the promotion of the Manchester Rangers brand across the city to the Polish community.

This supports the RLEF (Rugby League Europe Federation) commitment for sport to integrate migrants into new communities. Which was a key point raised in the recent EU Sport Forum in March at the Hague.

A delighted club chairman Phil Fitton said “Manchester Rangers is a community club everyone in the city is welcome to become a part of the club, Rugby League is an inclusive family sport.”

“As well as developing the game in Manchester, we want to support the growth of Rugby League internationally and our relationship with Polish Rugby League is fantastic place to start.”

Polska XIII President Lukasz Lucka had this to add “I’m very excited about establishing links with Manchester Rangers. It’s a fantastic club and community, which has not forget about grass roots development on their way to greatness. We hope to get Polish migrants in UK involved in Rugby League, and I strongly believe, that cooperation with the Rangers is big step forward to make our plans come true. “