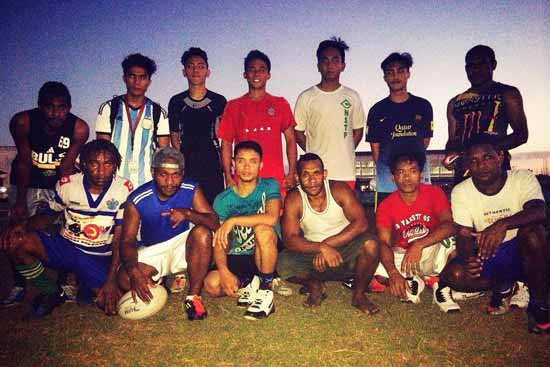 The final team for the inaugural Philippines National Rugby League (PNRL) competition to be held in the third quarter of 2016 has been confirmed.

The Central Luzon Crusaders previously known as the Indang Rebels, a Papua New Guinea (PNG) University/College student side. That has competed in the annual PNG Independence day competition over the last 3 years since 2013, held at the Adventist University of the Philippines (AUP) in Cavite. Will be the fourth team in the PNRL’s inaugural competition.

The Central Luzon Crusaders will play against the Albay Vulcans, Manila Storm and University of Batangas Toro sides in this four team competition.

Gorden Asa a 24year old PNG national taking a break from his third year Civil Engineering degree at Cavite State University will be leading the Central Luzon Crusaders in the PNRL’s inaugural season.

In High School, Gorden played 5/8 for the Goroka International School where former PNG Kumul half back International Ilai Geno was his coach.

In 2013 when Gorden went to the Philippines to study, he was one of the organizing students who formed the Indang Rebels. To celebrate PNG Independence day at AUP where they played against another four PNG student sides in a Rugby League competition. Which is a fitting way to celebrate your countries’ Independence Day, when you are the only country in the world, where “The Greatest Game of All” is your national sport!

Since joining the PNRL board in 2013 the same year Gorden went to study in the Philippines Marc Leabres a Filipino-Australian, “Performance Analyst” with the NRL Cronulla Sharks has been looking for ways to help develop “The Greatest Game of All” in the Philippines.

So late last year Marc made contact with four out of the six PNG Independence day celebrating teams at AUP, the Indang Rebels, PerSouth Brothers, Recto Royals and the United Vikings about sponsoring one of the teams to be part of a PNRL local Rugby League completion. Only Gorden of the Indang Rebels returned Marcs’ messages.

For Marc whose family hails from Central Luzon and who wanted to honor the Filipino-Australian team he played for in the PNRL’s second Rugby League event in 2013, the Zambales 9’s, as the Clark city Crusaders – he combined both names for sentimental and PNRL historical reasons and established the Central Luzon Crusaders.

Gorden informed Marc that there was nothing special in the “Rebels” name, what was in common with the Indang team was that many of the PNG students lived in Indang, but where spread out studying at various Universities and Colleges in the area. What was important to Gorden and the PNG students was that they now have a chance to play in a regular Rugby League competition, develop the sport, and be part of making history in the Philippines:

“We took the offer to show many people our interest in Rugby League. It was a good opportunity for us to train and promote Rugby League to our Filipino friends in our school, province and region as a whole. I hope as we go further in our games more people will join and Rugby League will be a well-known sport in the Philippines. Our aim is to teach everyone what Rugby League is and how it is being played.

The interest from Filipino students and surrounding community in Indang Cavite is so high. Every day there is a new person interested to play. That’s why right now we are inviting everyone to join to play.

Currently there are 10 Filipinos who occasionally attend training sessions with us. More importantly we have 2 PE teachers from Cavite State University showing interest as well as a player from one of the local Filipino Union teams”.

The PNRL are fortunate that so many PNG nationals are studying in the Philippines and the partnerships they are forming with them will allow “The Greatest Game of All” to develop and grow in the country. Through the role modeling of the only people in the world where Rugby League is nationally loved by all as their country’s national sport, the PNG students will teach local Filipinos to love the game as well!