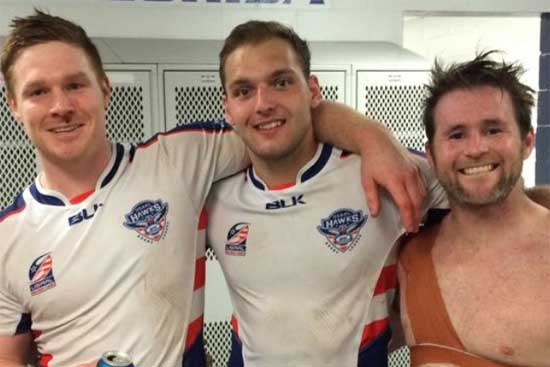 Riding the wave of the USA Hawks’ winning campaign in the 2017 Rugby League World Cup qualifiers, moves are underway to form a new club in New York.

Players on the American national team, who are based in the big apple, are hoping to cash in on the Hawks’ success to attract current and new players to their club at White Plains.

As one of the main driving forces behind the drive, Luke Barron, explains, the desire to start a new club has come from a core group of players who have been together for years playing both Rugby League and Rugby Union.

“We were all a close group of guys who play for White Plains RFC and the Connecticut Wildcats,” Barron tells RugbyLeaguePlanet. “Once the Wildcats folded, we took it upon ourselves to set a platform for our future of playing together.”

New York already has two clubs that compete in the USA Rugby League (USARL) competition, the New York Knights and the Brooklyn Kings, so what makes these guys confident they can garner enough interest in another club in the area?

“New York is a big state and the Knights and Kings are located in the heart of the city, Brooklyn and Manhattan,” said Barron.

“We are located more north in the Westchester area, bordering Connecticut. This allows players from Connecticut cities a closer club to play out of, such as myself out of Stamford. We took on White Plains so we can partner/link with White Plains RFC.”

There are six core founders of the new club, to be known as the White Plains Wombats, and they have ponied up all of the expenses thus far.

Naturally, they are looking for sponsors, which is one of the reasons they have linked with White Plains RFC to help keep expenses in check.

“We have asked everyone who plans to be a part of the White Plains Wombats to step up and help with the recruitment drive and we have received a great amount of interest already from experienced and unexperienced players alike,” continued Barron.

“Mark Offerdahl (USA captain) and myself are the two heading the recruitment portion of the club, but again, it’s a group effort and is really starting to show it.”

Barron says the plan is to be up and running in time for the start of the 2016 USARL season, which is scheduled to kick off this summer and he says the League is totally in step with their plans.

“The Board has been a great support to us, especially Danny Hanson and Peter Illfield,” added Barron. “We are very excited for our future with the USARL.”
And as for that name? Well, there’s a good reason for it.

“The Wombats is actually a pretty funny subject,” said Barron. “Talk of creating a new team has been in the works for some time and it has always been the boys calling it the Wombats jokingly.

“Once we put it into gear and actually decided that we were creating a new club, it just seemed right to call it the Wombats.

“We also wanted to create a brand and a name like Wombats is unique and gets people talking. It also flows well with White Plains and a Wombat is a strong animal that protects its territory, so it just seemed fitting.”

You can check out the new club’s Facebook page at https://www.facebook.com/whiteplainswombatsXIII