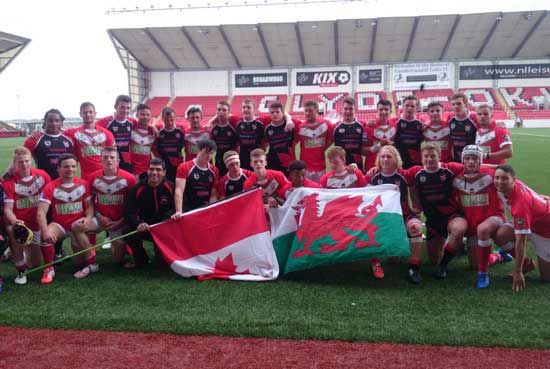 South Wales Scorpions and the Canada Rugby League are delighted to announce a partnership which will see the two parties working closely together in a variety of different ways in the months and years ahead.

As part of the new arrangement the Scorpions under 20s will be travelling to Canada in October 2016 to play two games in Toronto with the Canadians likely to make the journey in the opposite direction in 2017. The partnership will also see individual players being given the opportunity to play abroad and experience different cultures and lifestyles.

The relationship between South Wales Scorpions and the Canada Rugby League dates back to the 2014 Commonwealth Nines. The Wales international side, who were managed in that tournament by Scorpions’ co-director Neil Williams, featured several of today’s Scorpions side, as they overcame the Canadians in the Bronze Medal game.

The playing side is just one area that the two parties are looking to develop. According to Scorpions’ co-director Marc Lovering, the arrangement will also give both the opportunity to raise profile and increase brand awareness.

Lovering said: “I spoke to Paul O’Keefe, the new president of the Canada Rugby League, back in November about the potential to send the under 20s across to play in Canada. During those initial conversations it soon became apparent that there were a number of areas we could look to work more closely together in order to benefit both parties.

“We will be looking at ways that we can attract new sponsors who may be attracted by the possibility of additional exposure in Canada as well as the UK and working with existing sponsors to see if there are ways our Canadian links can help their businesses. We will also be looking at ways of selling Canadian merchandise through our club shop and vice versa and helping to raise the profile of both through the various social media outlets. There are no constraints on the partnership and we will be happy to work closely with the Canadians in any way we can to help make our respective clubs and association stronger.”

The Canadian Wolverine senior squad is currently ranked 13th in the Rugby League International Federation World Rankings and were close to qualifying for the World Cup for the first time in history, losing out to the USA. Canadian star Rhys Jack’s recent move to Bradford Bulls a timely reminder of the quality of Canadian players.

Paul O’Keefe is delighted by the new arrangement and is looking forward to the Scorpions bringing their under 20s squad to Canada.

He said: “The exchange idea gives young Canadian players the opportunity to gain experience by playing & training under professional coaching. We are also very privileged to have a great partnership in the UK with Super League Club Huddersfield Giants, who will continue to show our players what it takes to become a full time professional player. I am also excited at the prospect of having Scorpions players coming to Canada for working holidays where they can enjoy educating and playing with young Canadian players on their teams.”

The CRLA Board started with a complete new team of directors at approximately the same time that the Scorpions current owners purchased the club from Wales Rugby League.

O’Keefe added: “We have a lot in common with both groups taking over control recently and needing to grow our game in regions where rugby union has previously had a higher profile. We are both very open to new business ideas and can see opportunities where we can both benefit by working together.”