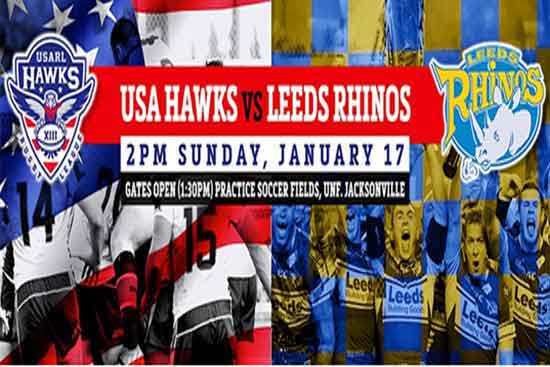 English Super League champions Leeds Rhinos have opened their 2016 preseason with a 74-6 thumping of the USA Hawks in an exhibition game Sunday in Jacksonville, Florida.

To use an old cliché, Leeds scored early and often as they crushed the United States’ national Rugby League team.

The Rhinos, who led 38-0 at halftime, scored 13 tries in all and to say they never looked in any danger would be to state the bleeding obvious.

Hardaker also added eight conversions for a personal tally of 24 points, while Jordan Lilley chimed in with three conversions of his own after replacing Hardaker as the goal-kicker in the fourth quarter.

The USA managed to avoid the shutout when prop Marcos Flegmann (Boston 13s) scored on the last play of the game. His try was converted by Mike Timpano (Philadelphia Fight).

It was all one-way traffic pretty much from the opening kickoff and it was Hardaker who got the scoring procession started early on when he scored in the opening minutes following an American turnover at their own end of the field.

That series of plays followed an impressive goal line stand by the Hawks.

From there the Rhinos kept the pedal to the metal and kept the scoreboard ticking over at almost a point a minute.

Leeds head coach Brian McDermott named a strong squad for the match and the class of his players showed from start to finish.

USA stand-in coach Robin Peers says he knew the Hawks were going to be in for a tough day at the office when he saw the squad the Rhinos announced.

“I think they were only missing two or three of their regular starters,” Coach Peers told RugbyLeaguePlanet.

“Playing a team like Leeds, their processes are way ahead of where the US is at the moment, but I thought the boys in the middle of the field played well.”

The US looked good in patches and put in their best set of the game late in the first quarter only to see Briscoe scamper for an 80-meter try against them.

Leeds torched the opposition throughout the match, basically whenever they got into open space.

“Once Leeds got a roll on it was very hard to contain them,” said Peers. “Once they moved the ball, or one of our guys missed a tackle they scored.”

The USA fielded a completely domestic-based team Sunday and Peers thinks the experience gained by the players will stand them, and the game in America in general, in good stead.

“The 20 boys who pulled on the USA jersey can take a lot from it,” continued Peers. “I told them they can take it back to their clubs to improve the standard of play here.

“If you take into consideration that we were missing five of our best domestic players, plus our six or seven US eligible Australian players, if Leeds had played against the full USA team the scoreline might have been different.”