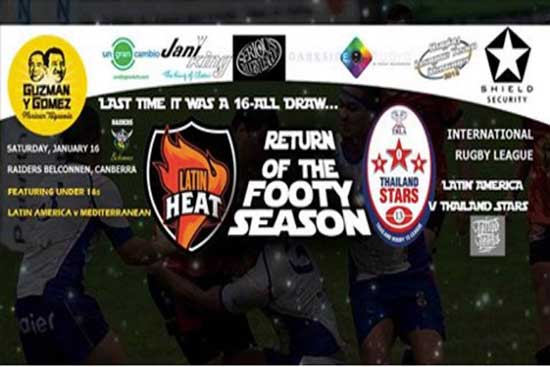 LATIN Heat’s rapid rise – marked by a team-best 54-16 defeat of Thailand Stars on Saturday – could well become the death of the pioneering Rugby League outfit.

But not in the immediate sense.

The biggest win by the composite Latin American team in an international game came just 18 months after a 16-all draw against the same Thai side.

Playing numbers, experience and traction in Latin America have grown incrementally over the same period.

Through it all, GYG Heat officials have continually voiced their plan to spawn stand-alone Latino nations – effectively making themselves obsolete over time.

“We will support individual Chile and El Salvador teams at the January 30 International Rugby League Nines, along with a combined team representing the other 22 nations of South and Central America,” Latin Heat president Robert Burgin said.

“Beyond that we feel 2016 is the right year for the first full-blooded 17-a-side game between two Latino nations…possibly multiple nations.

“Chile, El Salvador and Peru have the best depth of Australian-trained players, while Argentina and Mexico are playing and conducting development work domestically.

“These are the most likely nations to emerge first, though you cannot discount Brazil, Uruguay, Colombia and Ecuador, all of which have taken initial steps.

“As these nations come into being in their own right, it would stand to reason there will be less need for players to pull together under the Latin Heat banner.

“But for now, it’s a very enjoyable adventure for us all.”

Diplomats from Chile, Uruguay, Mexico and Ecuador all attended the match in the Australian capital city in a major show of support from the community.

One more country that might be added to the list of international hopefuls is Guyana, the birthplace of destructive Heat centre Kevin McKenzie, scorer of four tries against the Thais in Canberra.

Three of his touchdowns were fodder for highlight reels, including a trampling of three defenders on the lefthand sideline that was eerily reminiscent of Jonah Lomu.

Another of his tries came diving at full-stretch to a perfectly-weighted Trent Millar stab in-goal, while his final scoring effort was a 50m run along the paint from a long ball.

The Georgetown beast was far from a solo performer however, with fullback James Horvat scoring three tries and three goals on debut.

Sommers, playing his last match as co-captain of the Heat, was pulled up just short of the tryline in the dying minutes.

In a contest played over quarters to thwart any ill effects of the January climate, Thailand scored all of its points in the third quarter with a rally that saw them draw as close as 26-12

While both teams celebrated together after the game, the match itself was at times fiery, with the referee halting play at least three times to keep tempers in check.

The Stars’ best and fairest player of 2015, Rhys Tucker, even spent a 10min stint in the sinbin for an uncharacteristic strike to the face of Latino substitute Israel Perez (Chile).

A supremely pleasing aspect of the Heat’s comprehensive win – eclipsing the previous record 40-6 victory against Portugal – was that it came without several of the Latinos’ most established stars.

Uruguayan pair Jason Vidal and Andres Rossini, yet to play for the Heat, were also unavailable as they work to try and secure roles with Parramatta and South Sydney respectively.

Prior to the Heat-Stars match, the Latinos also featured in a curtain-raiser against Mediterranean United, a side containing many players from conflict-affected nations such as Syria, Iraq, Jordan and Lebanon.

Proving exceptionally well-drilled and much bigger than the Latinos, Mediterranean triumphed 60-0, with hooker Khoder Mitwari a standout with 28 points from three tries, eight goals and two try assists.

The Heat were much more competitive in the second stanza and it was diminutive halves Gabriel Papa (Argentina/Uruguay) and Luke Morrissey (Uruguay) who fought hardest against the victors.

Though it was a tough loss by the Latino youngsters, many friendships were formed by the weekend camp in Canberra and will serve the squad well in future campaigns.