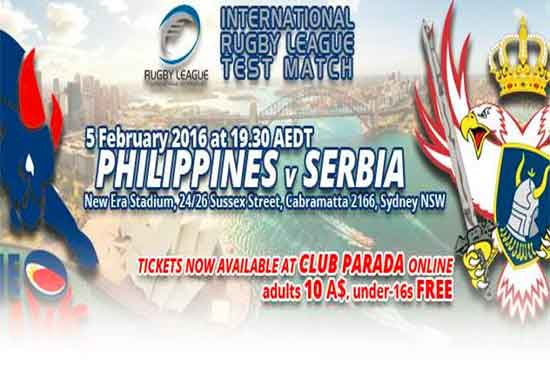 One of the fasted growing rugby league European nations Serbia is touring Australia from the 28th of January to the 8th of February 2016.

As part of their tour the Serbian national team will take part in the 2016 Cabramatta 9s tournament which will take place on Saturday the 30th January 2016 at Cabramatta in Sydney’s south-western Suburbs.

Six days later on Friday the 5th at 7.30pm Serbia will take on the Philippines in a one off international at New Era stadium , 24/26 Sussex st, Cabramatta. Tickets for the international can be purchased by clicking here

Serbia are still in the running to qualify for the 2017 Rugby League World Cup and will be looking to gain more experience while on tour in Australia.

If you want to see two exciting emerging international rugby league teams battle it out make sure you grab your tickets and get down to Cabramatta and support the guys from Serbia and the Philippines as they help take rugby league global!