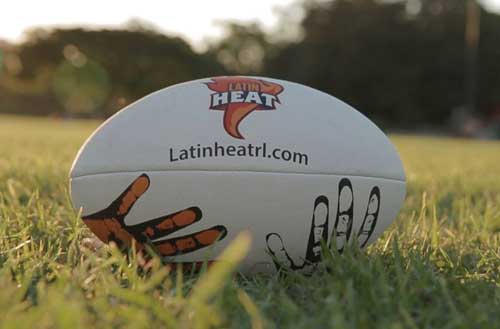 Opportunity to Settle the Score

LATIN America and Thailand will kick-off the 2016 representative Rugby League season in Canberra on Saturday, January 16, with both teams determined to settle the score.

After a waterlogged 16-all nail-biter at Windsor in June 2014, the Latinos and Thais have waited impatiently for the opportunity of a rematch.

None more so than GYG Latin Heat co-captain Jonathan Espinoza, who missed a penalty kick from almost dead in front as the clock wound down to a tied result.

“I’ve been copping flak for the last 18 months from everybody,” the powerful forward revealed.

“Needless to say, I always point out that I was first to make a tackle after the miss and won back possession, but everyone seems to overlook that.”

Another keen to make an impact will be speedy centre Sebastian Delapaz, who was disallowed a try from a kick-chase in what would have also been a match-winning play.

Delapaz is expected to be the only survivor from the Heat backline that faced Thailand last time, with a wave of new blood given an opportunity.

Among those set to debut in Latin Heat colours are Sevens Player of the Tournament James Horvat (Mounties) and half Brad Millar (Beenleigh Lions).

Fresh from winning the Latinos’ Best and Fairest award at annual presentations, prop Eduardo Wegener will lead the way at his homeground, West Belconnen.

Situated in the Canberra suburb of Holt, the venue will also host a curtain-raiser between Latin Heat and Mediterranean youth squads.

Both teams will contain numerous players from refugee families who have adopted Rugby League as a passion since relocating to Australia.

Admission will be $5 on the gate, all of which goes to supporting Rugby League in developing nations.

In December the GYG Latin Heat met with Rugby League officials instrumental in the game’s uptake in Brazil and Argentina.

Recently the Heat donated $1000 each towards equipment for both Argentinian and Mexican competitions.