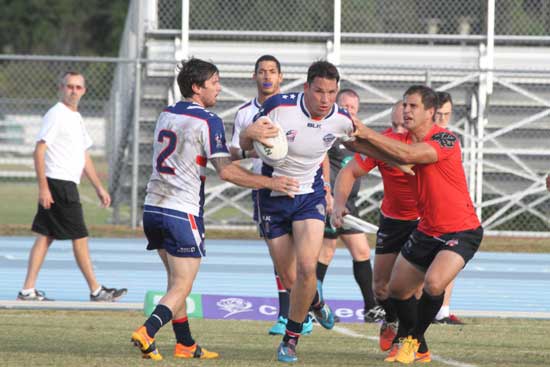 By Brian Lowe, Date: 21/12/15 (Photo Credit Allene Rachal) As we revisit the Rugby League World Cup Qualifiers – Americas, it would be fair to say the USA Hawks were the deserved winners. They were the best team overall throughout the series which is why they won, but in fact, drilling down into the statistics shows the Hawks actually were the best team in many respects.

For openers, they were the only team to win both of their games and in the end that is the #1 reason why they qualified.

Along the way though they scored more points than anyone else and tied for the fewest points allowed, and consequently were the only team with a positive points differential.
The Hawks also scored more tries than their opponents, while again tying for the fewest allowed.
It stands to reason therefore that the US was better both offensively and defensively than either Canada or Jamaica, the stats back that up, but it also could be argued that the USA team was better at sticking to its game plans and strategies than was the competition.
Essentially, US head coach Brian McDermott wanted the Hawks to hit it up the middle for the first four or five tackles in a set and then kick behind the opposition to turn them around, while also trying to force errors by their opponents that they could then capitalize on.
McDermott, however, also was cognisant of the fact that high completion rates alone don’t win matches, so he coached his players to look for opportunities to do something with the ball to break down the opposition while employing strong go-forwards and quick rucks.
The US did just that and hooker Kristian Freed was arguably one of the best at executing that strategy. His heads up play and quick passes from dummy half sparked many a line break and several of the Hawks’ tries.
Captain Mark Offerdahl was another player who was exceptional at executing McDermott’s game plans by continuously taking the ball up and never shirking contact.
As a matter of fact, with few exceptions just about everyone on the American team turned in stellar performances in the two games, but the Howard brothers, forward Steve and center-cum-forward Danny, in particular warrant special mentions for their non-stop, no-quit efforts.
If there was a flaw in the Hawks’ overall play it would be that they gave away too many penalties. Fortunately for them, however, it did not come back to bite them as the Canadians and Jamaicans were almost as bad in that category.
Further analysis of the statistics shows that Jamaica fared a little better than did Canada in most of the main phases of the game.
While both countries finished equal on points, Jamaica had a slightly better points differential and a better tries differential.
That said, both the Wolverines and Reggae Warriors were their own worst enemies at times with poor ball handling letting them down, often at crucial stages of their matches.
In general, the Jamaicans were a little more efficient on offense, although there really wasn’t much separating the two teams.
Unlike the US, whose well-structured defensive patterns stayed pretty much intact throughout, Canada and Jamaica were patchy on defense and it could be argued that that aspect of their game proved to be costliest.
From Jamaica’s standpoint, their best performers were prop Ross Peltier and lock Lamont Bryan, as well as veteran fullback Wayne Rettie, all of whom had a solid tournament.
Similarly, for Canada the Jacks brothers, hooker Rhys and five-eighth Ryley, co-captain and halfback Steve Piatek and lock ‘The Sheriff’ Jamie Kelly were standouts in terms of ROI for their efforts.
Overall, the three teams were fairly evenly matched and understandably all suffered from the first game yips.
It’s always difficult for a team to fire on all cylinders right off the bat with just a short preparation time, and in the case of RLWC Qualifying tournaments, often combined with a mix of domestic and heritage players who usually haven’t met each other prior to going into camp.
Canada earned a reputation as comeback kids after giving up 18 points to Jamaica before rattling off 18 unanswered points of their own in the last quarter to salvage a tie in their opening game.
The Jamaicans were perhaps the biggest underachievers, particularly as they stacked their team with heritage players from the UK and genuinely believed they had a legitimate shot at advancing, while the USA can probably lay claim to being the most proficient of the three.
As a sidebar to the series, Canada kept its unbeaten run against Jamaica (since 2011) intact, the US snapped its three-game losing streak against the Canadians, while the Jamaicans have yet to beat the USA dating back to their first meeting in 2009.