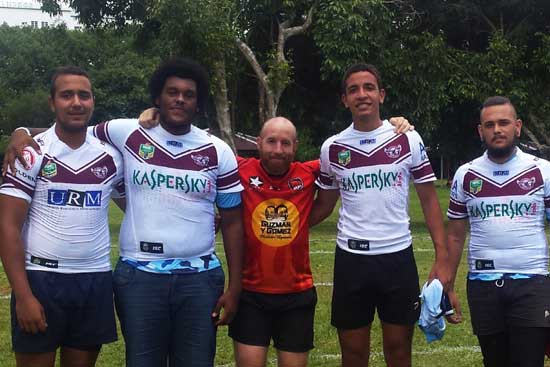 AN HISTORIC meeting of Rugby League officials in South America has discussed key steps for the game in engaging Latin America, including seeking cooperation from NRL partners Fox Sports.

Presently Brasil has groups in at least six states interested in adopting Rugby League, but geographical distance between those has kept participation and development to a minimum.

Operating out of Australia, the GYG Latin Heat has harnessed interest in the NRL from the 700 million Latino residents and expatriates globally, growing exponentially in terms of players, events and community recognition.

It has participated in numerous international matches and will facilitate the presence of Chile, Colombia, Ecuador, El Salvador, Peru and Uruguay at January’s International Rugby League Nines in Sydney.

Sr Froes, Sr Varela and Sr Burgin were in agreeance that, to achieve the ultimate goal of Latin American participation in World Cup 2021 qualification, the following matters are of priority:

1.       Negotiating the broadcast of NRL matches on Fox Sports in Latin America. Fox Sports recently signed a US$ 1.3billion deal with the NRL. In addition Fox Sports has multiple sports channels throughout South and Central America. The NRL was previously broadcast in Brasil on SKY Sports Plus, but is no longer. In announcing its new deal  with the NRL, Fox Sports released a statement saying it would “use its worldwide resources to take NRL on to the global stage where we believe over time its incredible appeal will see an army of new fans emerge”.

2.       Ensuring Brasil, Argentina and other interested nations from South and Central America both understand and adhere to the membership application process for the Rugby League International Federation (RLIF). Both Sr Froes and Sr Varela admitted confusion in this area.

3.       That these nations accept an invitation and adopt funding models that will allow them to participate in the RLIF’s 2017 Universities World Cup.

4.       Continuing support for a Spanish or Portuguese-speaking delegate to the RLIF or one of its subsidiaries – Rugby League European Federation or Asia Pacific Rugby League.

5.       Supporting the eventual establishment of an Americas Rugby League confederation that may more clearly show a pathway towards full World Cup participation and assist in localised development.

6.       Sharing existing coaching and development materials, and working together to produce further materials of use to Latin American participants, officials and supporters.

7.       Remaining accessible for all social classes and identifying talent to professional Rugby League bodies in a way that benefits the sport, the players and Latin American communities.

8.       Further considering funding and promotional avenues to overcome the vast financial and geographical differences that exist in South and Central America.

9.       Better demonstrating the advantages of exposure to Spanish and Portuguese-speaking audiences for existing partners of Rugby League globally.

Sr Varela said that, with financial constraints, the focus had to be better promotion of the sport’s undeniably attractive qualities across a broader Latin American audience.

“We have many sports shown here in Latin America on television that have no chance of being played, but with Rugby League you know this will not be the case,” he said.

“Rugby Union is played by over 100,000 people in Argentina and covered widely and what are they promoting?

“They are working towards cleaner rucks, cleaner scrums, cleaner mauls.

“That basically means they see Rugby League as a model of the future.”

Sr Froes, as with many Brasileiro fans of the sport, became attracted to the NRL after watching previous telecasts of matches on cable channel SKY Sports Plus.

He said that data showed Brasil had the sixth-largest global audience figures for NRL matches during that period.

“People got to know who Johnathan Thurston was, who Greg Inglis was,” he said.

“I personally became a big Sonny Bill Williams fan when he was at the Roosters.

“The number of Rugby Union players in Brasil has grown significantly the last few years and these players also have an appetite for Rugby League when they get the opportunity.

“In my mind, broadcasting on Fox Sports in Latin America is one thing that would capture the attention of a wider population.”

Aside from holding discussions throughout the weekend, the three bodies also held a two-hour clinic at Sao Lourenco, in which players of a wide age were exposed to Rugby League skills and gameplay.

Sao Lourenco is famed across Brasil for its tourism and natural beauty and, in a soccer-mad country, boasts a Rugby club as one of the focal points of its main attraction, Parque das Aguas.

“There were a couple of kids out there who were well over six foot and were quick on their feet,” noted Sr Burgin, a journalist with Rugby League Week Magazine and registered coach and player in Australia.

“The community here also loves contact sports, something we witnessed over the weekend when the Aldo v McGregor UFC fight was broadcast.

“It’s only a matter of time before someone comes out of Latin America to play NRL and they will become an inspiration for others to follow suit.”

Donated uniforms from NRL club Manly Sea Eagles and GYG Latin Heat were presented to both the Brasilian and Argentinian representatives.