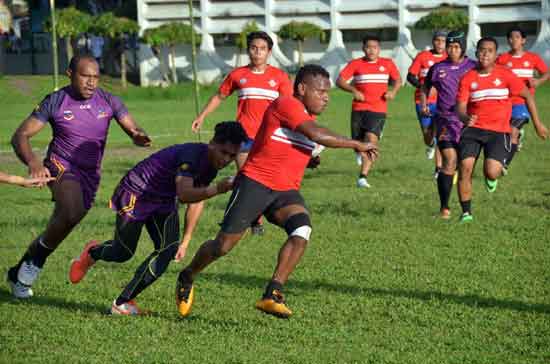 With the goal post made out of Bamboo one could tell that you were watching a Rugby League game in some exotic location away from the games traditional heart land of Australia and Northern England.

With Papua New Guinea (PNG) the only country in the world where Rugby League is the national sport. You can begin to see the fanatical influence they have for “The Greatest Game of All” rub off on the local Filipino players.

PNG is probably the only country in the world where players would get into 2 vans and leave 9pm on a Thursday night and travel for 13 hours to play a game the following Friday afternoon. And it is this love for Rugby League that PNG players are introducing to their Filipino counterparts.

Tim Buipe the Manila Storm coach said that the Manila Storm players arrived at Lagazpi city 10am Friday morning and rested for 5 hours before heading off to Bicol University Ground for the 3:00pm game.

Ric Raymond Bellen the founder of the Albay Vulcans also said that when PNG students in neighbouring provinces heard that a Rugby League game was being played in Legazpi city many travelled for 3 hours to come and watch the game!

For the game itself.

The match was preceded by children playing a 10 minute Rugby game as a curtain raiser.

At 3:15pm the Manila Storm and the Abay Vulcans entered the field with the game preceded by the playing of both the Philippines and PNG national anthems. In recognition and respect to players from both nations.

The game was played in the official 80 minute format, with 40 minute halves.

The Manila Storm had an 18 man squad but through good use of their bench they managed to hold off determined Albay Vulcans attacks on their home field.

For their first game of Rugby League, which they have been waiting to play for almost 2 years. The Albay Vulcans team had well planned and organized set pieces, which is understandable considering their Union background. The home crowd appreciated their player’s effort, with Tim saying that their shouting was deafening at times, especially when the home team was in the Manila Storm’s half.

Tim said that the Manila Storm players improved from their first hit out a month earlier against the Hong Kong Residents team, with better movement of the ball in attacking play and crucially less dropped ball from their inaugural game.

With the ever increasing influence of PNG students in establishing Rugby League in the Philippines. The game official referee was University of Perpetual Help student, Martin Yanda. Who was a former Half Back for the Lae Snax Tigers Rugby League club in PNG’s National Rugby League Digicel Cup.

Martin has volunteered to referee in the planned 2016 PNRL inaugural local tournament.