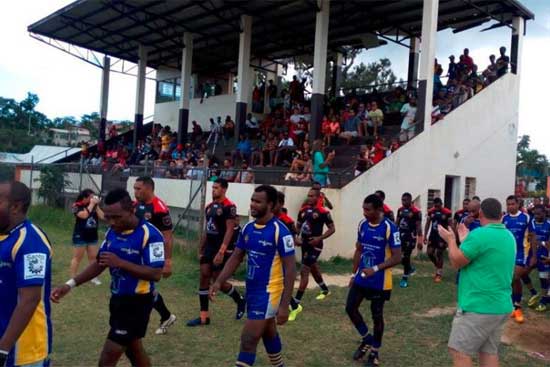 Some great news from the Pacific Nation of Vanuatu with the 4th instalment of the annual rugby league State of Origin fixture finally going ahead on Saturday in what has been a tough year for the people of Vanuatu.

The clash between the Port Vila Fire Ants and the Santo Boars was due to be played on the 21st of November but had to be rescheduled after Air Vanuatu cancelled the flight that was due to take the Port Vila team to Santo.

2015 hasn’t been a great year for Vanuatu. In March this year the Pacific Nation was devastated by Cyclone Pam which left a trail of destruction across the southern part of Vanuatu.

The nation is still recovering from the Cyclone and after nearly not going ahead at all the annual Vanuatu State of Origin clash was a testament to Vanuatu resilience.

Vanuatu Rugby League have a short but proud history and were formed in late 2011. They participated in the Cabramatta 9s in February 2012 and surprised everyone by making the final.

Since then they have played internationals against the likes of Philippines, Niue, Solomon Islands and Greece.

The VRL will now look forward to 2016 where they can build on the rugby league advances made on 2015. If rugby league continues to grow in this tiny Pacific nation one day we might just see that great Vanuatu resilience shine through during the Rugby League World Cup.