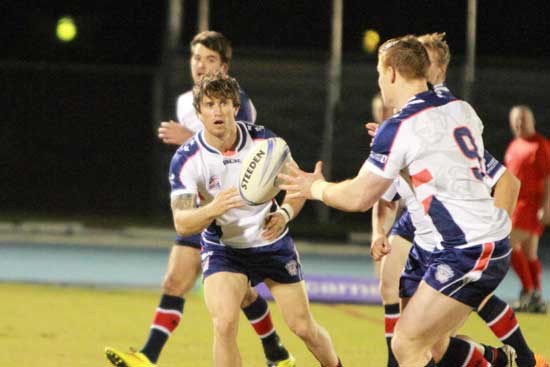 The planning and preparation and hopes and aspirations of two nations will all come down to 80-minutes of football on what is expected to be a hot Saturday afternoon, in more ways than one, in North Florida.

The USA Hawks and Canada Wolverines will clash for the right to represent the Americas at the 2017 Rugby League World Cup when they face off in Game 3 of the Firehouse Subs Qualifying series in Jacksonville.

The winner advances to Rugby League’s showcase tournament in Australia, New Zealand and Papua New Guinea, while the loser will be left to lament what might have been.

The Hawks (1-0-0) are expected to give their archrivals all that they can handle and then some as they strive to make back-to-back appearances at the World Cup.

On the flipside, Canada (0-0-1) won’t be lacking in motivation. This is their maiden run at qualifying and they have made it abundantly clear that they have come to Florida’s First Coast on a mission to punch their first ever ticket to the World Cup.

They believe that their three straight W’s against the USA in the last two Colonial Cup series puts them in a good position to achieve that goal.

Hawks’ captain Mark Offerdahl clearly has other ideas. He says his teammates are well prepared, both mentally and physically.

“We’re a lot better prepared than we were for the first game,” said Offerdahl. “We’ve all been doing our programs, we’re all on the same page and we all know what we need to do to beat Canada.”

Offerdahl could also claim to having more than just a hunch about what the Canadian strategies might be given that he played this past Australian season for the Tweed Heads Seagulls in the Intrust Super Cup in Queensland, a team coached by Canadian head coach Aaron Zimmerle.

“I don’t want to give too much away in case he reads this and changes his strategies,” added Offerdahl. “He’s obviously a very well rounded coach.

“What I saw on Tuesday is that they’re very well drilled, but there’s only so much you can take out of one game and it’s more about working on our game and ironing out our kinks.”

One tactic in particular being used by the Wolverines hasn’t gone unnoticed by the home team.

“They’re very vocal on social media I’ll give them that,” continued Offerdahl. “We’re always confident. We’re Americans of course we’re going to be confident, but at the same time you respect your enemies, so we have a lot of respect for them and the way they play.

“We’re going to go in there all guns blazing and use our brains as well as our aggression and hopefully get over the top of them.”

The skipper believes having Leeds Rhinos head coach Brian McDermott in charge is a huge advantage for the US.

He says McDermott is very adept at breaking down the game and making things easy to understand from a player’s perspective.

The coach himself says the mood within the Hawks’ squad is positive, mixed with apprehension.

“We’ve got through some work this week, we’ve adjusted maybe one or two things that needed adjusting,” said McDermott. “But at the same time we know being over confident at this stage is probably not going to help us.

“I think we’ve got the right balance between having a healthy respect for Canada, but at the same time we’re confident in what we’re going to do.”

Despite being at the top of his game having coached Leeds to the English Super League championship, McDermott admits to feeling the pressure of trying to get the USA to the World Cup.

“Absolutely I feel pressure,” commented McDermott. “I’m involved with the USA team, I’m representing the USA at the moment, I’m their head coach.

“I’m giving these players their steer, I’m giving them the lead and I’m hopefully going to get them qualified for the 2017 World Cup and of course I want to be successful and I’d like America to qualify.

“The World Cup’s healthier with big nations in it. For Rugby League’s benefit, it’s important that USA qualify. Not to be disparaging of Canada or Jamaica, but to have a nation like the USA involved in the Rugby League World Cup is a big thing.”

Some players are under injury clouds, including Abe Cohen, who will be a late decision because of a calf strain, while others will be eleventh hour decisions.

The game will be broadcast live at https://www.ginicam.com/rugbyleague