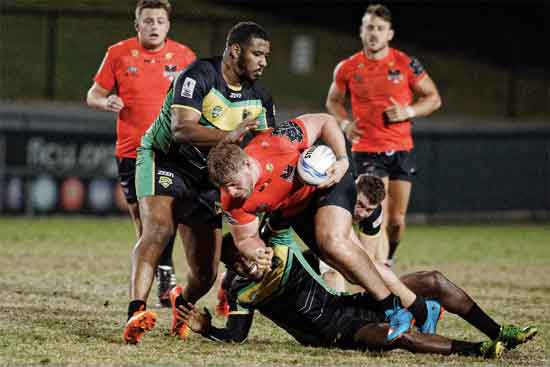 Jamaica came oh so close to pulling off what would have been a stunning upset only to see Canada rally late to snatch an unexpected 18-18 draw in the Firehouse Subs Rugby League World Cup Americas Region Qualifying series.

Game 2 in the central Florida city of DeLand Tuesday night was supposed to have been a routine win for the Wolverines, but someone forgot to tell the Jamaicans.

Leading 18-0 after three quarters of the match, the Reggae Warriors looked to have it in the bag, then cue the Wolverines, who from now on should be called the ’No Quit’ guys.

They looked down and out, but like a prizefighter on the ropes they somehow found the inner strength to dig deep and slug their way to a thrilling tie.

“The thing that inspires me about the group is with 14 minutes to go they could find 18 points because they’re not ready to go home yet,” Canada head coach Aaron Zimmerle told RugbyLeaguePlanet.

“We’re still in the hunt, we just have to beat America next.”

Jamaica was a vastly different team to the one beaten by the USA in Game 1. To their credit, they regrouped magnificently in the short turnaround between matches and were full of running.

Their ball handling, which had let them down in the series opener, was much crisper, as was their passing, and they made ground in almost every set.

Canada’s defensive patterns were excellent early on and they looked very enterprising, but couldn’t convert that into points. In fact, much like Jamaica in the first game, their movements were riddled with knock-ons, they pushed the ball unnecessarily and bombed two or three scoring opportunities.

Conversely, the Jamaicans began to exude confidence and in the 18th minute five-eighth Joel Farrell slotted a penalty for the first points of the game.

A mere three minutes later and big forward Lamont Bryan crashed over the line from close in following unrelenting pressure. Farrell converted and the Reggae Warriors were suddenly up 8-0.

At that point, the Wolverines’ defense started to open up with the Jamaicans finding gaps left and right and they took advantage by pushing the ball wide where winger Alex Brown was able to skirt the cover to score in the corner.

The unconverted try made it 12-0 and that’s how things stayed through halftime.

The second stanza began much the same way as the first had ended with Jamaica being able to complete their sets and forcing Canada to spend more time than they wanted on defense.

The Canadians continued to show glimpses of the attacking flair they’re becoming known for, but also continued to shoot themselves in the foot with turnovers and in the 56th minute they paid the price when Jamaican fullback Wayne Reittie dotted down from close range after another Wolverines’ mistake.

Farrell’s kick was good and the Reggae Warriors were out by 18-0 and seemingly on their way to their first win against Canada since 2010.

However, Rugby League can be a funny game with the unexpected happening at times and that’s what transpired at Spec Martin Stadium. Canada suddenly started to get in synch.

Jamaica’s Tyrone Rowe was yellow carded for holding a player back and that started the pendulum swinging the other way.

Up to that point, there had been a disconnect between Canada’s heritage players and the homegrown guys for no other reason than they hadn’t played as a unit before.

Five-eighth Ryley Jacks then showed why his teammates call him ‘The Architect’. He started to exploit holes in Jamaica’s relaxing defense and in the 63rd minute he broke free for Canada’s first try, converted by co-captain Steve Piatek.

Trailing 18-6, the Wolverines needed to be the next to score to keep their qualification hopes alive and they were in the 75th minute when fullback Robin Legault found himself on the end of another Jacks bust to dive over the line. Again Piatek was on the money with the conversion to make it 18-12.

From the ensuing restart, and with the intensity ratcheting up as time was winding down, the Wolverines made good yards with the ball as Jamaica tried desperately to regain control of the game.

But in the 78th minute Jamaica’s worst fears were realized when Legault again found some space on the left flank and dragged a tackler with him as he scored the Wolverines’ third try.

It left Piatek with a difficult kick, but the money man, cool as a cucumber, dissected the uprights to knot the scores at 18-all.

Inside the final few seconds the Canadians worked themselves into position for a shot at a drop goal, but it missed and both countries took away one point each from the drawn match.

“Lots to be proud of, we got a point out of the game and we just have to build on this now and hopefully keep these guys together and get some matches under our belts.”

As for the Canadians, they are happy with the way they clawed their way back into contention.

“We’ve got the belief in ourselves to go all the way,” added Piatek. “We came here with qualifying in mind and that’s still our goal and we’re still alive.”

Game 3 Saturday in Jacksonville between the USA and Canada will determine who advances to the big dance in 2017.