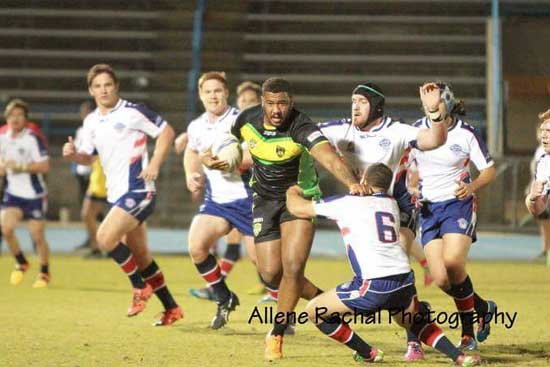 Talk about pressure, well that’s what Jamaica finds itself under, and a lot of it, as it gets ready for what is a do or die game against Canada in the Firehouse Subs Rugby League World Cup Americas Region Qualifying series.

Game 2 is set for Tuesday night in the Central Florida city of DeLand.

The Reggae Warriors are already in a hole at 0-1 following their loss to the USA Hawks in the opening game of the series, so it is a must-win match for them.

Head coach Romeo Monteith feels they played too compact a style of game against the Americans instead of spreading the ball out wide where they have speed to burn.

He says they were lured into trying to take on the Hawks up the middle, but it didn’t work because the US defensive lines held firm, so their strategy will be re-assessed for the Canadians.

“We need to move the ball faster to get on the outside and really use our speed,” Monteith told RugbyLeaguePlanet.

He says what also let them down was poor ball handling, punctuated by a string of knock-ons that disrupted their flow and that’s something else they are working on fixing.

“We’re here to do a job, so we have to get them motivated again for one more go,” said Monteith. “It’s going to be tough against the Canadians.

“It’s another team that has been together for a while. They had two games against the States (Colonial Cup) and they’re similar to the States in the type of preparation they’ve had, so it’s going to be difficult.

“Hopefully the boys can find the strength from within to go out there and play for the full 80 minutes again and see if the result can be in our favor this time.”

If Jamaica manages to win, a result that most pundits would probably see as unlikely, they will keep themselves in the mix, at least mathematically.

They would then need Canada to knock off the US in the final game so that all teams would finish with 1-1 records. If that were to happen, it would then come down to point differentials and other tiebreak criteria to determine which country advances to the 2017 World Cup.

Statistically, however, the odds are against the Jamaicans. They haven’t beaten Canada in their last four meetings.

Overall they are 1-4 all-time against the Wolverines dating back to their very first matchup in 2010, which they won. It was at the Atlantic Cup and was Canada’s first game back after a ten-year absence from Rugby League.

What is in their favor perhaps, and granted it’s a bit of a stretch, is the fact that their lone victory against the Canadians was scored in Jacksonville, about 90 minutes north up the I-95.

The big question is can the Jamaicans regroup in the short space of time between their two matches.

The game will be broadcast live at ginicam.com/rugbyleague