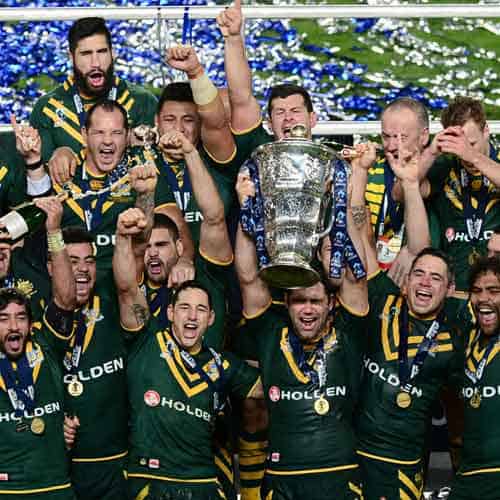 The ARL Commission has appointed Mal Meninga as dedicated Kangaroos coach through to the end of 2019.

One of the most decorated players and coaches of his generation, Meninga officially begins his term with the Kangaroos today after a successful stint with the XXXX Queensland Maroons.

NRL Head of Football Todd Greenberg said Meninga would also be based in Sydney and would provide an ambassadorial role for the game, in addition to his coaching role.

“Mal’s work with us starts today – so it is a very important day for the Kangaroos,” Mr Greenberg said.

“Our aim is to win the Rugby League World Cup in 2017 and the job officially begins now.”

Meninga said it was his personal ambition to become Kangaroos coach.

“For the players, it is the ultimate privilege to the wear the colours of your country, and it is something that they all aspire to,” Meninga said.

“For me, it’s always been something I’ve wanted to do. It is truly an honour to be in this position, as the new coach of the Kangaroos.”

Mr Greenberg said Meninga would also work closely with the development of the Junior Kangaroos, Australian Schoolboys and Australian Jillaroos programs, as well as other national high-performance pathways.

“Mal’s reputation as a player and as a coach, and also as a figure in our game, is second-to-none,” Mr Greenberg said.

“This is an incredibly exciting appointment for the Kangaroos.

“We feel that Mal’s appointment will ensure that playing for the Kangaroos is the pinnacle of a player’s career, which is the way it should be.

“The progression of Mal from one of the most successful Queensland coaches ever to the Australian coaching position is an appropriate one for the game.

“Playing for the Kangaroos should be the greatest honour a player can have and Mal will no doubt bring that mentality to the squad.”

Meninga’s appointment follows the approval of a program designed to return the Kangaroos to the top of the International Rugby League ladder. The cornerstone of that policy is the appointment of a coach dedicated to the team.

“I am looking forward to the opportunity to improve the Kangaroos program, developing emerging and high-performance players including the Junior Kangaroos and Australian Schoolboys along the way,” Meninga said.

“I couldn’t think of a coach more suited to this role, given Mal’s achievements as a former Kangaroos captain and his understanding of what representing Australia means,” Smith said.

“He has a proven record at representative level, as well as a tremendous ability to help his players perform at the highest level.”

Both Mr Greenberg and Meninga also thanked the Queensland Rugby League for their support of the transition process.

“I am extremely grateful for the support I have received from the Queensland Rugby League – the players, the staff and the executive team,” Meninga said.

“I’d also like to thank Denis Handlin and the team at Sony who have made sure this process has been as seamless as possible.”