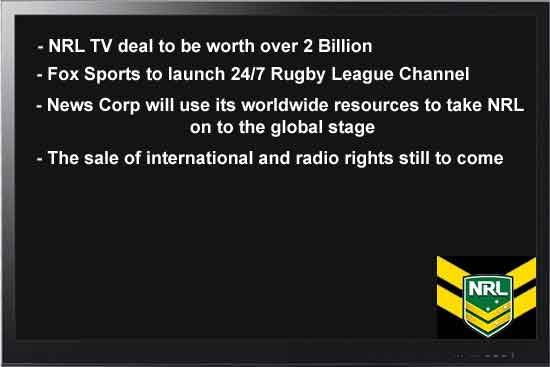 Rugby League will reach more fans than ever before – both in Australia and globally – under a massive new NRL broadcast deal unveiled today.

The deal is worth $1.8 billion to the NRL – 70 per cent higher than the existing rights.

With the sale of international and radio rights to come, it is anticipated that the total value of the final package will exceed $1.9 billion.

Under the agreement, many of the changes to improve the schedule of games will start from 2016 – two years early.

Under the new package:
• Telstra Premiership matches will be held five days a week in 2016 – from Thursday to Monday inclusive – before reverting to four days a week (Thursday to Sunday) in 2017
• From 2017 the Monday night game will be moved to Friday at 6pm
• Nine Network will telecast games live and free to air on Thursday and Friday nights and Sunday afternoon in 2016
• FOX SPORTS will show all eight games every weekend – including five exclusive telecasts each weekend.Super Saturday, featuring three live games, will be retained by FOX SPORTS.
• The last five Saturday night games of each season will be telecast on free to air television in the build up to the Finals series
• From 2017 FOX SPORTS will run a dedicated Rugby League channel – giving the game more exposure than any time in the game’s history
• News Corp Australia will use its local media and newspaper resources to promote the game wherever it is played
• And it will use its worldwide resources to take NRL on to the global stage where we believe over time its incredible appeal will see an army of new fans emerge
• Telstra will remain the naming rights partner of the NRL and will telecast the game digitally on its mobile network as well as replays and highlights on its new Telstra TV platform in 2016.
Australian Rugby League Commission Chairman, John Grant said the package was a win for all the game’s stakeholders and especially its fans.

“We have delivered the very best outcome for the game as a whole,” he said.

“In revisiting the number of free to air games in this agreement, we were responding to the value both Nine and News Corp Australia saw in the Saturday game. Compared to our current schedule, this result still means more games live and free for our fans and gives grass roots and elite clubs and organisations immense financial benefits,” he said.

“The ARL Commission has been working on a revised schedule to incorporate the 18 Thursday night games in 2016 in conjunction with the television rights negotiations without increasing the number of 5 day turn-arounds for players. This will be released this afternoon,” he said.

Hugh Marks, CEO of Nine Entertainment Co. said “This is an outstanding result for the game with more live and free coverage for NRL fans from 2016.

“Nine has always placed enormous value on its strong media partnership with Rugby League and that will only grow over the next seven years. Our quality coverage of NRL games will this year be complemented by the NRL Rookie – just one of many ways we seek to expand and enrich our fans’ experience on free to air.”

News Corp Australia chief executive Peter Tonagh said “This is a truly outstanding deal that will, for the first time in the history of the game, give fans live coverage of every game each round.

“Only Telstra can bring the sport experience and technology together using Australia’s largest mobile network and we are very excited to give fans digital access to NRL action,” Mr Penn said.

FOX SPORTS CEO, Patrick Delany, said: “This is the best deal for the game, for the fans and for Foxtel subscribers.

“This breakthrough deal will ensure fans get to see their NRL team live in action every week up to the Grand Final on FOX SPORTS without ad-breaks during play and in high definition.

“In another huge win for the sport, FOX SPORTS will launch a dedicated 24/7 Rugby League channel in 2017, giving fans what they have been asking for.

“This new deal would not have been possible without the support of Channel Nine and the ARLC. And together, with our digital partner Telstra, we will deliver the most dynamic NRL coverage to fans than ever before,” Mr Delany said.