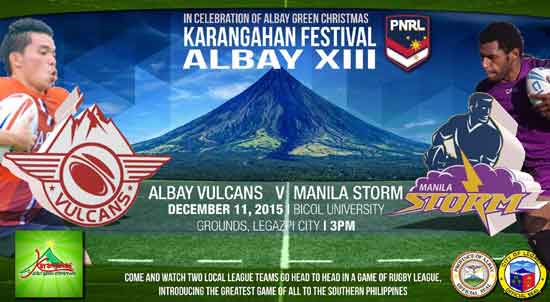 Ric Raymond Bellen the founder of the Albay Vulcans Rugby Club is not new to “The Greatest Game of All”. He was a Board member of the Philippines National Rugby League (PNRL) in 2013 and was instrumental in organising local Filipino teams for the October 2013 PNRL Clark 9s tournament with Tom Simpson.

Early in 2014 with his wife Mary Rose missing her home town, Ric moved the family to Legazpi city in the Southern tip of the Philippines main island of Luzon. Finding himself isolated from both the Union and League scenes in Northern and Central Luzon he started his own club saying:

“I knew that footy is in my blood, so my dedication and passion drove me to share the sport here in this province.”

Under the threat of an active Mount Mayon Volcano, that inspired the club’s name, with Ric stating:

“The name Vulcans, came from the main attraction here in Albay, which is the Mayon Volcano. Also known as Mount Mayon, which is an active volcano in the province of Albay. And so we called ourselves the Vulcans”.

So with over a year since the PNRL had any contact with the Albay Vulcans, Ric again took the initiative and contacted the PNRL so they could play their long awaited first Rugby League game against the Manila Storm.

Ric wishes to grow the sport of Rugby League in the Philippines, so that is why he wanted to challenge teams who were playing League, stating:

“We know that the Storm made a great impact and history for all League fans, as they played the HongKong side a few weeks ago. We want to help each other, to be more competitive and this will set a great example that we can organise Rugby league games at a local level in the Philippines.”

Ric feels that their first game of League will be very tough for himself as coach. In its inception he was preparing the Albay Vulvans to play League, but with no team to play against he shifted to playing Union. So he now needs to review League rules and start working on their play:

“Physically and intellectually we are working hard. I know the Storm has the edge in terms of experience in the game, but they are only ahead by one game against us. But we will work hard to be able to show them that we are ready for the planned League season next year.”

With the first Rugby League game in Legazpi, between the Albay Vulcans and the Manila Storm on December 11 at 3pm on the Bicol University grounds, being held in conjunction with the annual Karangahan Festival. We encourage Balikbayans, Expats and Wantoks to go along and watch “The Greatest Game of All” and take in Albay’s best in culture, arts, produce and rich heritage at the festivals, all held beneath the picturesque Mount Mayon Volcano.