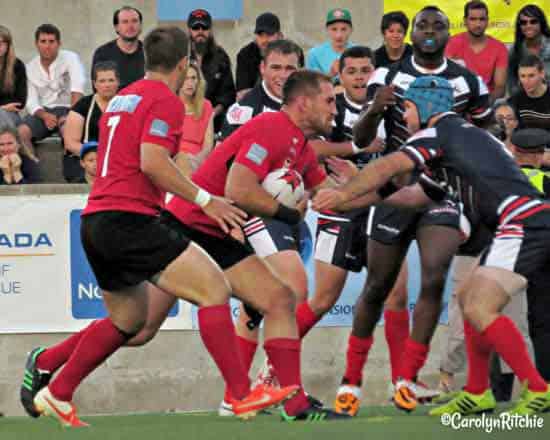 Only a few weeks ago Canada Rugby League Association (CRLA) were letting their fans know of a big announcement to come, leaving a feeling of suspense and excitement amongst Canadian and International Rugby League fans. It was later revealed that CRLA would be partnering with NRL side, the Penrith Panthers.

This is an impressive step for CRLA whose improvements on the field can already be seen after the Canada Wolverines were too strong for the USA Hawks. The Wolverines won both of their recent Colonial Cup matches and took out the series for the second consecutive year.

The new partnership with the Panthers consists of CRLA sending their most committed players to Penrith, playing alongside feeder clubs and experiencing an increased intensity in their training schedules and during matches. Thoughts for Sports caught up with CRLA President, Paul O’Keefe, who has forecast not only the short term benefits of the partnership to the players selected, but also for the long term improvement of all CRLA players.

“Short term our goal is developing players who will be playing at a higher level… Long term we want these players to come back to Canada and share their experiences to help other players lift their games. Also they will be getting coaching accreditation while in Australia so we want them coaching young players when they return,” O’Keefe said.

CRLA has already created a strong working relationship with the General Manager of Penrith Junior Rugby League, Phil Cummings, who helped to create the new partnership, which they are hoping to expand on in the future. The new CRLA Board has provided a real strength to their organisation, with their extensive business experience they are helping grow Rugby League on and off the field in Canada.

“This is just the beginning of the relationship with the Penrith Panthers. Canada Rugby League also works with Super League Club, Huddersfield Giants, and sends two players each year over to them for a similar experience,” O’Keefe stated.

The players that will travel to Penrith have not been chosen as of yet. The opportunity has clearly motivated the Canadian athletes to improve their games.

“They are lined up wanting to be selected. We are very selective on who we send overseas as they need to be great ambassadors for Canada Rugby League”

“Players who have been sent on these development tours are walking salesmen for us when they return to Canada, telling all their mates about the opportunities we offer,” O’Keefe said.

The current footprint of Rugby League in Canada is impressive when considering that the sport only begun in Canada in 2010. CRLA consists of twelve teams across three competitions, with one in Alberta having just been established. International matches in Toronto have an averaged attendance of around 6,000.

An immediate goal that will strengthen the profile of Rugby League in Canada is to qualify for the 2017 World Cup. To do so, the Canada Wolverines will need to defeat the USA Hawks and Jamaica Reggae Warriors in just over a fortnight’s time. Qualifying for the World Cup would provide the team with untapped opportunities for sponsorship and attention in Canada.

Another positive alongside the partnership with the Panthers is that O’Keefe attended the Rugby League International Federation (RLIF) conference a few weeks ago. The new 8 year strategic plan was unveiled. One particular idea that appealed to O’Keefe was a 9s World Cup to compete with the concept of Rugby Union 7s.

“Rugby League 9s is a great concept for introducing new players to our game… We can see this as being a good way to increase profits from a major event like this so there is more money to be shared around for development work.” O’Keefe affirmed.

Money seems to be a key problem for developing nations, as identified at the RLIF conference. Marketing options for developing nations become very limited because their funds are mostly spent on player development. Whilst the Panthers (and Huddersfield Giants) have joined in the effort to expand Rugby League internationally, more can be done by the games’ two professional competitions.

“Clubs (NRL and Super League) can assist the development of future stars of the game by investing their time and money into nations trying to develop the sport. We’ve already seen great work from the NRL investing in development staff in PNG, Fiji, Tonga, Samoa etc.”

“We have to remember all the emerging nations are operated by volunteers who need training and resources,” O’Keefe explained.

There is no doubt that the CRLA and Panthers partnership is a great achievement and stepping stone for CRLA. Rugby League in Canada is growing at a measured pace and their success on the field is a testament to their work off it.

The one thing that the partnership has revealed is that there is an opportunity for the NRL and Super League (as well as their respective clubs) to do more for the international game. In a previous article we discussed that the Brooklyn Kings (USARL) have established a similar partnership with the Castleford Tigers. Why not expand this so every professional club has to look after a developing nation?

Countries like Serbia, USA, South Africa, Jamaica, Spain, the Philippines, Italy, Lebanon, etc. will be able to grow at a faster rate if their players are getting professional playing and coaching experience. Another opportunity would be to bring the international teams together during World Cups to train and learn from each other at the tournament’s conclusion instead of travelling back home and watching the remaining matches on television.

Clearly there is room for International Rugby League to grow, but it is pleasing that foundations are already being laid through partnerships such as the CRLA and Penrith Panthers. They have set an example for professional clubs and developing nations to follow.

Thoughts for Sports is a site that has been established in order to provide sport and business minded people the ability offer and read ideas and opinions to help further each other’s understanding of the global sport environment. Thoughts for Sports takes a particular emphasis on key sports in the Australian market including Rugby League, Cricket, Rugby Union and Tennis.