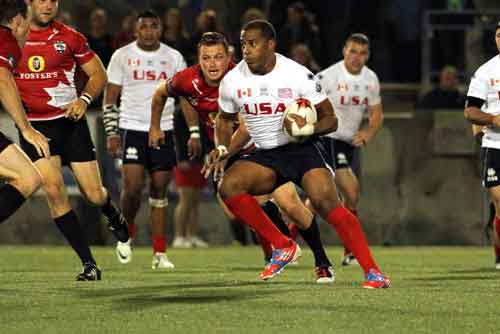 “I’m a strong believer in the notion that, once you’ve found what you have a talent for, with enough sacrifice, anything can be accomplished,” is the message USA head coach Brian McDermott is set to impress on his new charges.

The Leeds Rhinos boss, who secured an unprecedented treble for the club in 2015, has now turned his attention towards helping the Hawks get through to their second successive World Cup, as they prepare to take on Jamaica and Canada in the Firehouse Subs Qualifiers in early December in Florida.

He will join the Americans on the 1st December ahead of their opening game with the Reggae Warriors three days later.

“I’ve been impressed with the professionalism and dedication that has gone on in preparation for this camp through Peter Illfield and his staff,” noted McDermott. “I have passed on a whole range of philosophies I’d like to be instilled in both practice and how we might play.

“There are going to be some obvious differences coming from an environment where it’s what we do for a living to one where the players are part time but I’m expecting a level of commitment to equal that of any full time professional.

“One of my tasks is to make sure I’m not coaching the A-Z of rugby league while I’m out there. There’s a few areas I feel we will need to be great at and keeping it simple is something I’m keen on doing.”

Leeds Rhinos has developed a relationship with USA Rugby League which led to the appointment of McDermott. It will again see the Rhinos run a pre-season camp in Jacksonville, Florida in January 2016. During the one earlier this season, some of the most promising USARL talents were included in the training and got to play in the game against the USA Pioneers.

“The USA guys that were in the Rhinos camp last year were a credit to themselves, their coaches and the sport in the USA. They adapted to the our environment really quickly,” continued McDermott.

“During that time, Darryl ‘Spinner’ Howland and myself were involved in lots of conversations generally about rugby league, coaching and how it’s done in the USA. I initially offered to come over and hold some clinics, something I have done regularly, particularly in London.

“I see a lot of similarities in the challenges that USARL faces that London has, ones I really enjoyed taking on when I was down in the capital.”

In the interim since his appointment and his duties with Leeds, the head coach has kept in touch with the Hawks preparations for the Qualifiers.

He acknowledged: “The USARL management kept me in the loop of all developments and it’s been interesting to watch both the Colonial Cup games against Canada on the net.

“It’s crucial what we do as a team and understanding the major facets of the game will be key. My task in the few short days we have together is to get ultimate clarity in those areas. We will have the utmost respect for our opponents but will be primarily focussing on our own back yard.”

McDermott is also keen to start putting down long term roots to help develop rugby league in one of its biggest potential markets.

“The aim is to give the players involved and coaches the tools to go back to their clubs and help to grow the game. In the meantime, for us to have a chance of qualifying for the 2017 World Cup – which could have a significant impact on rugby league’s profile in the States – we need to come together quickly, make the required adjustments, commit to a plan and strategy and make the relevant sacrifices on the field.”