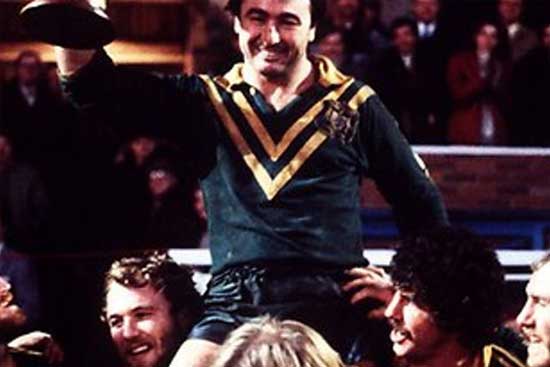 On the eve of the 1982 Rugby League Grand Final, a team to tour the U.K. was selected to battle for the Ashes. Many of the players that had worked hard in the Australian State of Origin series had been rewarded with test spots ahead of the incumbent test players. the press was almost speechless labelling them “one of the weakest sides ever selected” and commenting that they wouldn’t even win one game.

Australia won the first test 40-4 after a halftime lead of 10-4. In the second test, Les Boyd was sent of midway through the first half, but Australia still managed to find holes in the English defence and won 27-6. The third test was easily won 32-8. Including the Provincial games, Australia had now won 15 straight games.

The team then moved onto France, where they won all their Provincial matches and the two tests, 15-4 and 23-9. Giving the team a record breaking 23 straight victories, not bad for a team the Australian press had written off. The Aussies had a total of 752 points, including 176 tries, compared to their opponents 9. Steve Ella scored a record equalling 7 tries in one match.

On the field this team bought an unprecedented professionalism to the sport that helped raise the game from working class to one of Australia’s major sports.

Australian filmmaker David Tucker is attempting to make a documentary on the 1982 Australian Rugby League tour of the U.K. where the Invincibles legend was born.

David has just launched a Kickstarter campaign to try and raise the necessary funds to create The Invincibles documentary. With the majority of the players on board with the Project, the documentary will help tell the story of one of the most formidable sporting teams in history.

To help David with the funds to get this most important project of the ground please visit https://www.kickstarter.com/projects/65196656/the-invincibles