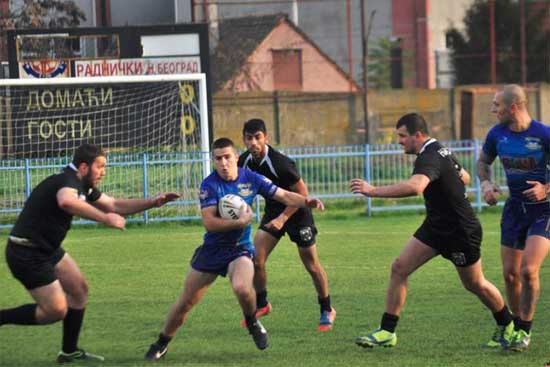 Serbian champion club Dorćol created more history when they regained the title with a 50-34 win over Partizan at FC Radnički Novi Beograd Stadium; their 13th win in 14 SRL Grand Finals seeing them become the first side to win all four available trophies.

With the Super Cup, Serbian Cup and 9s championship already secured, Dorćol avenged their only defeat in a championship final – to Red Star last year – in a terrific, highly entertaining clash.

“Partizan threw everything at us but I’m proud of my team mates because they stood up, held their nerve and brought the title back home,” said Dorćol captain Dalibor Vukanović, who was again a stand out performer, finishing with 18 points from a try and seven goals.

The sides were level 18-all at the break, Partizan showing few nerves in their first Grand Final, twice taking the lead with converted tries from hooker Branko Čarapić and loose forward Darko Abidinović.

Both times Dorćol levelled, before international Stevan Stevanović burst through the 25th minute gave them the lead, but the sides were all-square again at the break thanks to Pavle Vojinović’s try and a goal from Partizan skipper Džavid Jašari.

The game was won in the 20 minutes after half time when Dorćol ran in four tries, two in seven minutes to prop Relja Petrović, to establish a 40-18 lead on the hour.

Partizan staged a tremendous comeback with three touchdowns in response, to cut the deficit to only four points.

But the black and white’s couldn’t complete the come back and late scores to Andrej Mora and a second to centre Radovan Tajsić secured Dorćol their historic win.