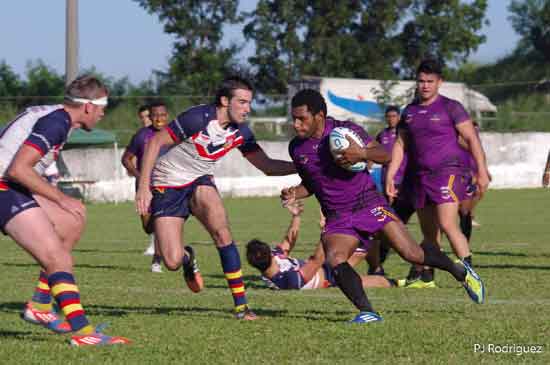 With only a total of six weeks’ worth of preparation due to Typhoon Lando, on November 7, Al Del Castillo Tesoro, Captained the Manila Storm at Southern Plains, Alabang for a heroic and reputable 34-40 result in their first hit out against a Hong Kong Residents team.

“75% of the Manila Storm team had no Rugby League experience. But they performed to a level that I did not expect of them.

The game itself was so physical, the Hong Kong side had the size and experience advantage, but the Manila Storm team who were a bunch of new boys put in solid defences that was so strong, that it made it difficult for the Hong Kong team to score more tries.

At one point all our scores were even, but the boys did a few ball handling errors at crucial moments, allowing the Hong Kong side to take advantage and get ahead.

This was the first experience of Rugby League for these local Filipino players, but they played with their heart and pride for their country in their home soil.

They just really surprised me on the Field during the actual game”.

The next match for the Manila Storm is on December 7. When they travel all the way to the foot of Mt. Mayon to Legazpi, to play the Albay Vulcans Rugby Club. Founded by Ric Raymond Bellen, a 2013 Philippines National Rugby League non-voting board member.

The Manila Storm and Hong Kong Resident line up for this historical first International Club Rugby League game in Manila were: