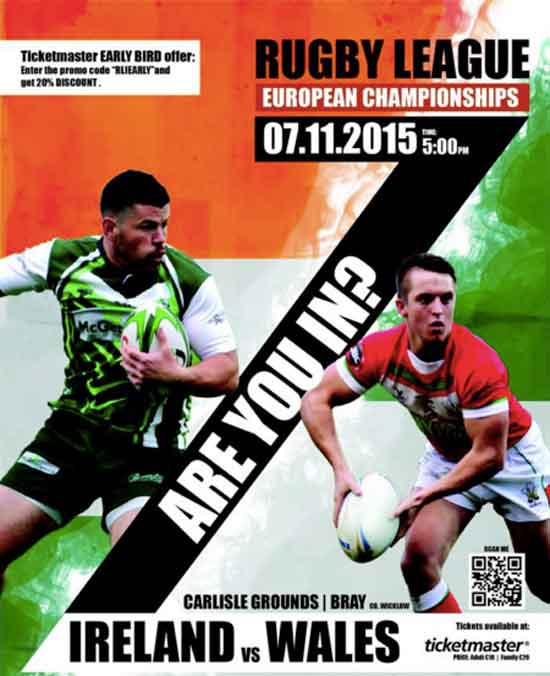 Three of the four nations can take the 2015 Rugby League European Championship crown tomorrow in another exceptionally close finish.

Last season Scotland won the tournament on the last day on points difference, but the Bravehearts are the only ones who are not in a position to retain their crown.

Wales, who travel to Bray to face Ireland (kick off 5pm) are the favourites to pick up their first crown since 2010 after two wins to date, but their opponents are in with a shout if they defeat their hosts by 15 points.

That will also be contingent upon the French, who face Scotland in Avignon (2pm kick off CET), who also have an outside chance of taking the crown.
For Wales the equation is simple, they have to only draw to lift the trophy.

Ireland need to win by 25 points more than France do over Scotland, if Les Tricolors are triumphant.

“We believe we can do it,” Kear said. “There’s an air of confidence in the group and there are a lot of young men out there earning their stripes as well as the experienced players.

“People like Craig Kopczak and Phil Joseph made massive impacts coming into the squad whilst the young lads are improving and developing which bodes well for the future.”

Ireland coach Mark Aston, who recalls Leeds prop Rob Mulhern, is hoping that his side can go one better than last year, when they were the victims of a late Welsh try that denied them the title.

He said: “Here we are again in the same position as last year, needing to beat Wales by a big score to win the Championship.

“We hope the Scots can do us a favour and keep the target low but at least we’ll know what we have to do by the time we kick off.

“Wales are a tougher proposition than last year and we’ll need to be on our best form to pull it off but I’m confident the boys will dig in and go for it – it should be a great occasion.”

France coach Richard Agar is hoping that his men will have a say in the ultimate destination of the trophy after a mixed autumn.

“It’s come down to the closest of finishes again,” he said. “We’re happy to be a position to win the competition, should the result go right for us in Ireland.”

“We’ve had a really good week’s preparation and there is some energy about the group,” Agar added. “As always, we are really looking forward to playing in front of our own fans.”

Second rower Dale Ferguson will captain Scotland for the first time in the absence of injured Danny Brough.

The Bravehearts will field their youngest ever team but head coach Steve McCormack says it must be seen as a positive, with uncapped second rower Gavin Grant, an Aberdonian who plays for Coventry Bears, called up.

“This is all about the long-term good for Scotland Rugby League,” said McCormack. “Ten of the 18 players have come through our pathway. We’re developing these players for the future.”

“This tournament was crying out for us to give opportunities to young lads as it’s the only year we can do it – we can’t do it against England, Australia and New Zealand in the Four Nations next year or in the 2017 World Cup.

“We made a conscious decision to increase our player pool and the young players have really stepped up.”

Scotland have a poor recent record against France having lost their all five meetings under McCormack.