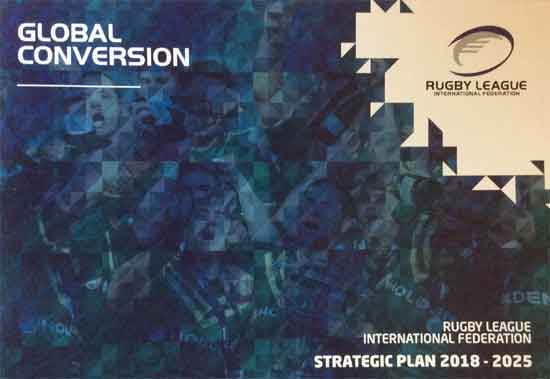 The Annual Congress and AGM of the Rugby League International Federation (RLIF) was held in Paris from 4 November to 5 November with 30 countries and confederations of the 67 nations now playing Rugby League represented.

The members received a presentation of the new RLIF strategic plan for 2018 – 2025 from the RLIF Chief Executive David Collier which the RLIF Board had approved on 22 September 2015. The plan details that RLIF will stage four multi national events in the the next 8 year cycle, a Calendar of Events was agreed which demonstrates the priority periods for domestic competitions and bi-lateral Test matches . The RLIF will provide resource to enhance the development of officials and consistency of the Laws of the game.

There will be a greater focus of resource on targeted nations for development and performance related incentives rather than standard grants for each nation.

‘It is imperative for our sport that we achieve greater global coverage through high quality international events. These events also provide the investment for our development programmes and the publication of the strategic plan along with appointment of David Collier as Chief Executive is a great step forward for the game.

‘We also received a high quality presentation from Michael Brown , the CEO of the Rugby League World Cup 2017, which promises to further build on the success of the 2013 World Cup.

‘The delegates were enthused by the progress which the RLIF has made in a short space of time and we look forward to the forthcoming tenders for our world events for the next cycle.

During the Congress the RLIF Board approved amendments to the eligibility rules which address the issues created when new states are created and learned of the successful competitions staged in Europe, Middle East, Africa, Americas and the Pacific Nations.

The draw was held for the Rugby League World Cup 2017 European Qualifier which will see the final three teams qualify for the 2017 World Cup. The RLIF Chief Executive also reported on the support which the International Federation is providing to members to achieve full recognition by National Olympic Committees and National Sports Agencies and debated the expansion of Nines.